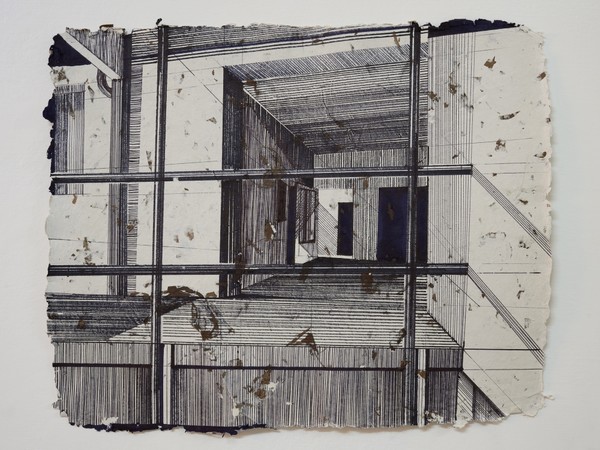 
Galleria Continua is pleased to present the online show "Donde reposa la mirada / Where the gaze rests", by Cuban artist Osvaldo González. The exhibition showcases five installations made of adhesive tape on Plexiglass and lights - common materials in the artist's work- and a set of ink drawings on manufactured paper.
The central idea of the installations emerged during the recent period of confinement, which became a kind of compulsory worldwide lock-in. This new series of works presents a slight change of perspective in relation to the previous ones as there is a shift in the position from which the artist observes and represents: his obsession with interior scenes now turns towards the external landscape. The pieces leave aside the intention to narrate and instead become evocative.
The connection that the artist establishes with the exterior is through windows, a symbolic resource that allows him not only to project an image of his external world but also to dream and idealize a reality.
"The day I said goodbye to you", is one of the most poetic works. A polyptych of nine pieces comprises the image of a completely closed window. The light that emanates from the background reminds us of the idea of the cycle of life, the possibility of the end of a period and the beginning of a new one.  "Ámbar dreams mountains", inspired by the artist's daughter's room and "Looking at the sky" are not interested in discovering what is happening outside, they speak of dreams, desires, of an infinite reality that goes beyond the glass. On the other hand, "The house away from the sea" is the work that perhaps most communicates the artist's physical-real environment, while "Bubble of happiness" tries to capture the details of the landscape.
In the case of the drawings, they focus on images that have their origins in "Memory Spaces", the series of installations that the artist developed between 2015 and 2018. The scenes of the interior spaces, coming from his domestic, family or work environment, reappear meticulously constructed with ink lines on manufactured paper. This paper was commissioned by the artist for these pieces, and its composition contains fragments of adhesive tape, which gives it a very special and warm texture. A conflict that Osvaldo almost always faces with his site specific –another important part of his work- is what to do with all that volume of trash material at the end of the exhibition, therefore the use of these drawing papers not only brings beauty, but also manages to articulate a coherent and sustainable cycle of relationships with all his work.
The piece "Boissy-le-Châtel", from the "Notes" series, is a large drawing whose 25 parts conform the image of a place that has been significant for the artist. This fragmentation is related to his idea of memory, to the way in which an event is remembered, as fragments or small memories.
In general, "Where the gaze rests" is part of Osvaldo González's constant research into the representation of spaces and all the symbolic and affective power they possess, trying to bring us closer to an experience of a physical and also spiritual nature.