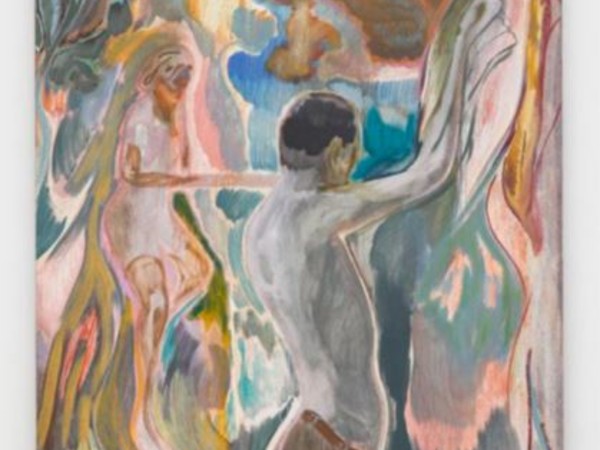 Within the historical ambiance of 17th century Palazzo Capris, ARTUNER is pleased to present an exhibition of new works by Michael Armitage, Paul Kneale & Tabor Robak. This is the first time the artists have exhibited in Italy. The takeover of Palazzo Capris will have an acchrochage format: each respective artist will use a distinct space within the Palazzo, thus articulating three solo shows in their own right. However, the artists’ works enter into dialogue with each other by addressing themes that are recurrent in the history of art, such as the exploration of memory and light. These are each confronted with a uniquely contemporary sensibility. Questions of innovative and traditional technology (scanner-printers, computers on one side, paintbrush on the other) intertwine with the use of different surfaces (canvas, bark and video-walls).
Armitage, Kneale and Robak are all acutely aware of the amphibious world we are starting to inhabit, where the boundaries between the digital and the physical are increasingly blurred. A fertile tension is generated through the radically different approaches taken on by these artists: from the more “traditional” paintings by Michael Armitage on lubugo (a rough surface made with bark from Uganda), through Paul Kneale’s scanner-paintings, to Tabor Robak’s video installations. Nature and technology continuously seep into each other, as Armitage’s paintings are informed by internet headlines, wildlife inhabits Robak’s virtual environments and Kneale attempts to capture light conditions and trace the passage of time.
French theorist Jean Baudrillard once argued against the instrumentalist view of technology – that humans use technology just for their purposes – instead proposing that it has the power not only to make things but to make minds. This exhibition attests to these shifts in perception and sensibility we are currently witnessing.

Paul Kneale was born in Canada (1986) he now lives and works in South London. He experiments with the digital image and the loss and retrieval of information which takes place online. The digital landscape is a key facet of his practice; Kneale explores the way in which it can be manifested and reimagined in the flesh of the physical object. Selected solo shows include 4 or 5 self portraits for free-form natural language descriptions of image regions, Evelyn Yard, London (2015), /b/random, Art Gallery of Ontario (2014), SEO & Co., Tank TV, London (2014), and Pleasure Principles, Fondation Galeries Lafayette, Paris (2014).

Tabor Robak was born in Portland, Oregon (1986) and now lives and works in New York. He started his career as a graphic designer: this has given him an intricate knowledge of marketing, and the use of digital technology to create images designed to sell. Through mirroring parallel realities, Robak highlights the symbolic relationship between the real and the imagined and the transhumanist world we are beginning to inhabit. Recent shows include Open Source: Art at the Eclipse of Capitalism, Galerie Max Hetzler and Artuner (2015), Fake Shrimp, Team Gallery, New York (2015), On Play and Critique, Migros Museum, Zurich (2015), and When you sit down to a meal you eat a story, 12th Lyon Biennale, Lyon (2013).