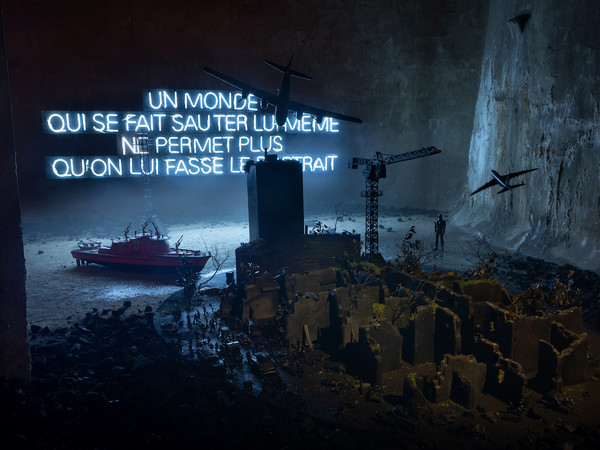 Accademia di Francia a Roma - Villa Medici, under the direction of Stéphane Gaillard, hosts the first monographic exhibition of Anne and Patrick Poirier in Italy, ROMAMOR, from 1st March to 5th May 2019.

Anne and Patrick Poirier are among the most celebrated French couples on the international art scene: a creative symbiosis that was born at Villa Medici fifty years ago. The passing of time, the traces and scars of its passage, the fragility of human constructions and the power of the ruins, ancient as contemporary, are the source of their creativity, resulting in an archeology permeated with melancholy and game.

Mysterious cities, imaginary archaeological reconstructions, fascination with ruins, study of gardens, union of historical works and site-specific productions are the elements that give life to the exhibition ROMAMOR at Villa Medici. The word that gives the name to the exhibition, "ROMAMOR" (2019), appears in neon in the arcade of the Atelier Balthus paying homage to this city so important for the two artists.

Anne was born in 1941 in Marseilles; Patrick in 1942 in Nantes. Their work is characterized by the impression of violence left by the time they lived in - from their early childhood, they were confronted with the war and its devastated landscapes. In 1943, Anne witnessed the bombing of the port of Marseille, and Patrick lost his father during the destruction of the historical centre of Nantes.
Winners of the Grand Prix de Rome in 1967, after attending the École des arts décoratifs in Paris, Anne and Patrick stayed at Villa Medici from 1968 to 1972 - invited by Balthus. And precisely at Villa Medici they decide to combine their artistic vision, jointly signing the works. Anne and Patrick Poirier belong to that generation of artists who, traveling and opening up to the world since the Sixties, have developed a fascination with the ancient cities and civilizations and, in particular, the processes of their disappearance.

The trilingual catalog (French, Italian, English), published by Electa, is conceived by the artists as an album of memories and projects, in which images and documents are collected and accompanied by the works on display. The catalog includes a conversation by Chiara Parisi with Anne Poirier and Patrick Poirier, and a poster.