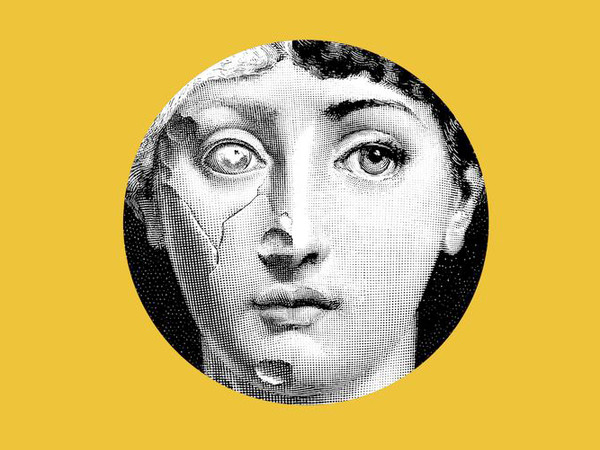 
To mark the twentieth anniversary of its opening, the Palazzo Altemps Museum hosts the exhibition “Citazioni pratiche. Fornasetti a Palazzo Altemps”.
Palazzo Altemps’s sculptures and spaces – the courtyard, the frescoed halls, the theatre – perfectly complement the twenty-seven installations set up to host over eight hundred of Fornasetti’s pieces. The contrast between the museum’s collection of classical antiquities and Fornasetti’s surreal, experimental artwork creates an irreverent, original and cultured dichotomy.
Fornasetti’s fantastical, amusing and sometimes dreamlike creations highlight Palazzo Altemps’s dual nature. Conceived as an aristocratic home, it has been owned by some of the most illustrious families in Italy, including the Riario, Medici, Orsini, Altemps and Hardouin families. In 1997 it became part of the Museo Nazionale Romano, housing the museum’s exhibits on the history of the collection of antiquities. As a tribute to the building’s history it also contains a permanent collection of the statues from antiquity collected over the centuries by the Roman nobility.
This wealth of historic art and collections is juxtaposed to the palazzo’s decor and Piero (1913-1988) and Barnaba (1950) Fornasetti’s artwork, highlighting their unusual take on everyday life. Their creative genius plays with references to classical architecture, archaeology and art history to create a world which never existed in reality.
The exhibit’s itinerary begins in the courtyard and continues in the museum’s halls, where the palazzo’s Renaissance decor and superb sculptures of antiquity serve as the perfect contrast for Fornasetti’s timeless masterpieces. The Roman marble group “Galatian Suicide” is the protagonist of a spectacular set, standing out against the six metres of backdrop provided by Fornasetti’s “Follia Pratica”, while a colony of ceramic cats lounge lazily on ancient ruins and trompe-l’oeil frescoes of ancient ruins alternate with their genuine counterparts in a sophisticated game of cultural echoes.
Drawings, furniture, and other objets tell the story of the Fornasetti studio, from the 1930s to the present day, revealing a dimension transcending simple decoration. They emerge as “an ode to creativity, and an inspiration to ponder” as Piero, the founder of the company, used to say. A journey through imagination, leading back to the very soul of Palazzo Altemps.