INTERTWINGLED – The Role of the Rug in Arts, Crafts and Design 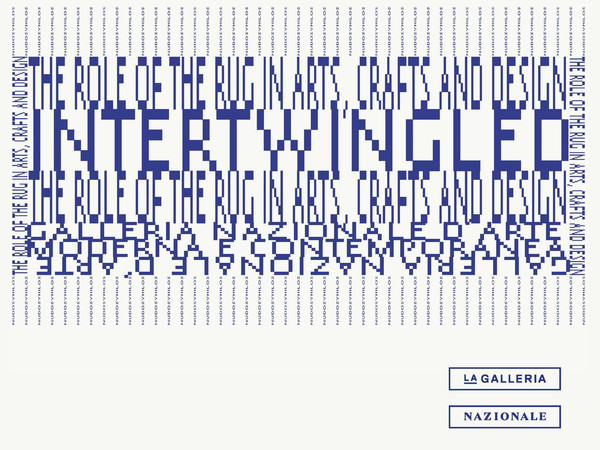 Ticket price: full € 10, reduced € 5, EU citizens aged between 18 and 25 € 2. Free: under 18, UE teachers and students of the faculties of architecture, conservation of cultural heritage, education sciences and degree courses in literature and literary subjects with archaeological or historical-artistic orientation of the faculties of literature and philosophy, people with disabilities and their carer, journalists

Everything is deeply intertwingled. The word was coined in 1960 by the American sociologist and philosopher Ted Nelson to define the complexity of the interconnections in the field of knowledge, where there are no isolated subjects, but there is knowledge as a whole, made up of myriad connections and cross-relationships, which cannot be disentangled and neatly divided into a hierarchical order, but must be explored in many dimensions. Only in this way can the connections and transformations of our world be made visible.

Embracing this vision, the exhibition INTERTWINGLED The Role of the Rug in Arts, Crafts and Design, curated by Martí Guixé and Inga Knölke and opening at the Galleria Nazionale on March 21, represents an extraordinary example, and offers for the first time a fascinating, open, and disruptive interpretation of the interconnected world in which we live. From the Salone Centrale to the Sala delle Colonne, and through precise references to the artworks in Time is Out of Joint, the exhibition explores rugs and tapestries in different fields – art, craft, design – and projects them into more conceptual realms, establishing new relationships with ideas such as nomadism, real estate, visible and invisible networks, hypertext, decentralized power, non-linear narratives, and the inherent power in the concept of unity.

Carpets and tapestries are physically composed of a multitude of threads and knots that intertwine to create patterns and surfaces. Therefore, they are both metaphors and interfaces of a device that shows-and-hides the weft and warp from which they originated. Carpets and tapestries can be interpreted as ways of occupying space in a material and metaphorical sense, since their fabric is also composed of political, economic, and social relationships. The network – seen as a framework, a palimpsest, a proto-configuration of a carpet or tapestry – is also the proto-configuration of our society and culture. And it is only by adopting this systemic thought, which is fueled by connections, that we can understand our cultural and material ecosystem, from small habits up to large scale decisions.

«INTERTWINGLED – in the words of the Director of the Galleria Nazionale, Cristiana Collu – is not only a dense and layered ethnography of design, it is a journey through many dimensions, weaving our experience with what we know and what we have yet to discover, along with what we don’t see but should be able to imagine. Visiting the exhibition will be like taking a step into simultaneity: discarding the obvious and discovering wonder; speeding up, slowing down, shifting pace; redesigning and recreating our experience».

Through the display of more than 80 works of painting, photography, design, and crafwork, the exhibition project, conceived by the curators as a single installation, presents the textile experimentations of artists such as Carla Accardi, Antonio Corpora, Gastone Novelli, Bice Lazzari, and Antonio Sanfilippo, tapestries that decorated the interiors of twentieth-century cruise ships, artworks such as Renata Boero’s Cromogramma, Alighiero Boetti’s Mappa, Maria Lai’s Sole scucito, the collages of Eduardo Chillida, Max Bucaille and Jirì Kolar, the performative practices of Jana Sterback and Egill Sæbjörnsson, elements by designers such as Marion Baruch, Ettore Sottsass, Aldo Rossi, Alessandro Pedretti, Italo Rota, Nani Marquina, up to tapestries, carpets and handkerchiefs made by Afghan women.