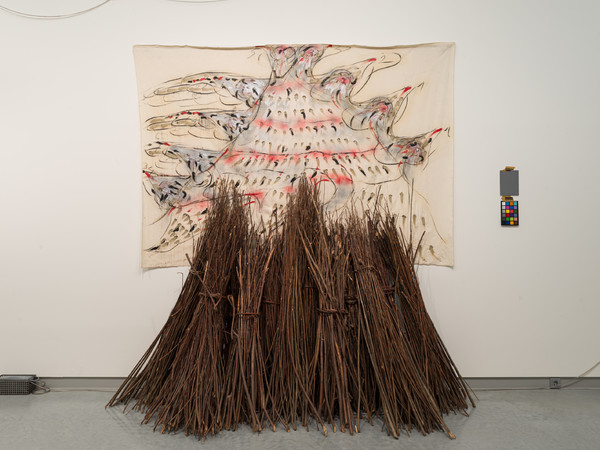 Times: Tuesday to Sunday from 10.00 am to 8.00 pm – closed Monday. Visitors are admitted until one hour before closing time

Ticket price: Full price € 12.50 – concession € 10.00 Concession for visitors aged 7 to 18 – € 6.00 Admission free for children up to the age of 6 Tuesday to Friday, groups € 10.00 per person Schools € 4.00 per person/student Saturday, Sunday and public holidays, groups € 12.50 per person One ticket admits visitors to all the exhibitions currently running at the Palazzo delle Esposizioni

This exhibition is part of the Mostre in mostra cycle in which the Palazzo delle Esposizioni proposes a reconstruction of some of the most significant exhibitions that have characterised the artistic panorama in Rome since the second half of the 20th century.

For this second edition we are revisiting the exhibition entitled “Mario Merz. Balla, Carrà, de Chirico, de Pisis, Morandi, Savinio, Severini” that opened in the historic Galleria dell’Oca in Rome on 15 March 1978, the product of a collaborative effort between the gallery’s founder Luisa Laureati Briganti and gallery owners Luciano Pistoi and Gian Enzo Sperone.

Considered one of the milestones in the history of contemporary exhibitions, the exhibition was striking for its – at the time – highly unusual pairing of work by Mario Merz, a leading figure in the Arte Povera movement, with work by the most important Italian artists of the 20th century.
We are revisiting this exhibition today precisely because it succeeded in breaking down stylistic, chronological and even ideological barriers, engineering the coexistence of a much acclaimed player in the Neo-avant-garde movements that gave up painting in the name of a genuine rapport with the world, with the most celebrated among those artists who had poured that world into their pictures, turning Italian painting of the first half of the 20th century into a truly incandescent moment in the development of art.
The marriage was celebrated in the total absence of attrition or of conflicting stances. It was devised by three gallery owners who may be considered to all intents and purposes to be its curators, and an artist, Mario Merz, who was exceptionally open to others. The leitmotif that they brought to light quite “naturally” is that of the history of art and of the quality of artworks, the mature expression of a process of contamination between conceptual art and the tradition of painting forged by the coming together of many voices.
Reviving this exhibition today will enable visitors to explore some of the problems and issues of recent culture, in particular the waning of certain rigid “compartmentalisations” typical of the 1970s, and the phenomenon inadequately dubbed “the return of painting”.
By comparison with today, the successful and – at the time – unusual pairing may be interpreted as one of the founding expressions of the fluidity – as liberating as it is complex – that marks our own day.
The three artworks by Mario Merz shown at the Galleria dell’Oca in 1978 will be on display at the Palazzo delle Esposizioni, together with the addition of another of his artworks that was being shown at the same time in Gian Enzo Sperone’s gallery in Rome. Taken as a group, these artworks – of such importance that they are now on display in museums or are part of major international collections – offer a highly significant synthesis of the essential characteristics of this artist’s work and of the materials and themes that we tend to find most frequently in his output, such as neon, Fibonacci’s numbers, the igloo, wax, stuffed animals, bundles of firewood and images painted on canvas devoid of a stretcher frame.

In the Galleria dell’Oca exhibition, Giacomo Balla, Carlo Carrà, Giorgio de Chirico, Filippo de Pisis, Giorgio Morandi, Alberto Savinio and Gino Severini were all represented by works produced in their best and most prolific years, some from such legendary collections as that of Léonce Rosenberg – which supplied de Chirico’s Chevaux se Cabrant (Horses Rearing) – others that had once formed part of the collections of leading art historians, such as Carrà’s Vele nel Porto (Sails in the Port) which still belongs to the Fondazione Roberto Longhi in Florence today. The Palazzo delle Esposizioni will be hosting many of those same artworks, while it has been decided to replace those paintings whose current whereabouts it proved impossible to trace with others akin to the missing works in terms of both quality and date.

As in the first edition, so in this instance too the criteria adopted to reconstruct the exhibition demand both a philological approach and a certain degree of approximation. The philological approach underpins the initiative and enables us to reconstruct the circumstances and the scope of the original exhibition, while approximation is of the essence when the project needs to be expanded to ensure that the exhibition is both complete and enjoyable. To quote the curator: “It is, after all, a segment of research that we are handing on to other scholars in the hope that they will be able to complete it and to enrich it.”

The most important documents from Luisa Laureati Briganti’s archive, on which the reconstruction of the exhibition is based, will be available for consultation at the Palazzo delle Esposizioni.

The exhibition is accompanied by a catalogue published by the Azienda Special Palaexpo with a vast iconographic apparatus, with essays by the curator, by Paola Bonani and by Francesco Guzzetti, and with a timeline drafted by Giulia Lotti covering the whole of the Galleria dell’Oca’s activity from when it opened in 1965 until it closed down in 2008.

A number of factors also link this exhibition with the exhibition on Pier Paolo Pasolini running simultaneously at the Palazzo delle Esposizioni and with echoes reverberating also in the Azienda Speciale Palaexpo’s other venues: the presence of two of the painters of whom the poet was fondest, Filippo de Pisis and Giorgio Morandi; and the fact that Pasolini was one of those who turned the Galleria dell’Oca into one of the most effervescent venues in that legendary moment in the life of Rome when extremely talented artists, writers, musicians, filmmakers, journalists and gallery owners shared their time with daily assiduity, creating a quality of life that we might call “prodigious” in the places that they frequented. Pasolini’s presence at the Galleria dell’Oca is confirmed by a series of photographs taken at the opening of an exhibition of work by Gastone Novelli in 1967 and on display here as a tribute to the poet, alongside documentary material relating to the exhibition itself.

The Mario Merz. Balla, Carrà, de Chirico, de Pisis, Morandi, Savinio, Severini. Rome 1978 exhibition is part of a vaster project being pursued by the Azienda Speciale Palaexpo involving the study and enhancement of contemporary art through exhibitions that have been held in Rome. Part of this programme is the Mostre a Roma 1970-1989 database, which can be freely consulted on the Palazzo delle Esposizioni’s website – and which is gradually being implemented with the valuable cooperation of the Fondazione la Quadriennale di Roma and with material generously made available by numerous private archives – enabling interested parties to access data and material relating to the exhibitions, whether in galleries, in public spaces or in “alternative” venues, held in Rome in the 1970s and ‘80s:
https://mostrearoma1970-1989.palazzoesposizioni.it