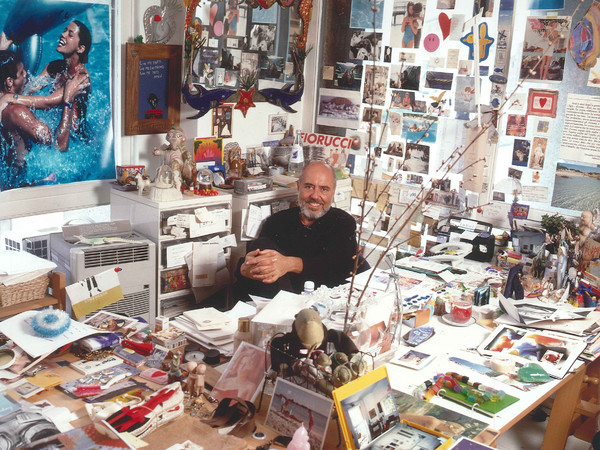 Elio Fiorucci inside his office, 2004

Ca’ Pesaro presents another intriguing dialogue between fashion and culture, this time focused on the pyrotechnical creativity of Elio Fiorucci,  the famous Milanese fashion designer who died in 2015 and was defined by many as the “champion  of democratic fashion”. Fiorucci, a unique personality in his field, revolutionised fashion and the fashion market by bringing the free and transgressive spirit of Swinging London to Milan at the end of the 1960s, and by moulding the taste of at least two generations of young people. Fiorucci’s innovative ideas, which were always at the forefront of readymade fashion, and his exploration of other worlds and cultures for inspiration, made him a fashion champion. In addition, his passion for art and contemporary architecture led him to mix with architects such as Sottsass, Mendini, Branzi and De Lucchi, who, like him, were major innovators, or artists like Keith Haring, Jean-Michel Basquiat and Andy Warhol, from whom he did not request artworks but creative contributions in conceiving places, stories and events where the main role was played by the individual and his or her desires.  In this way, Fiorucci was the first international stylist to involve the greatest architects, graphic artists and designers in presenting and publicising his clothes and accessories as an extension of the wearers themselves and their identity. Because for Elio, the product, the created  object, was the instrument for talking about other things. Aldo Colonetti maintains that “Fiorucci was a sort of Marcel Duchamp, not only in fashion but also, you could say, in the way he designed things, spaces, relationships between the object and the person”. As Fiorucci himself wrote: “In order to seek new ideas and design them, you need to look at other people, go beyond appearances, read between the lines of languages, not only of fashion but above all of everyday life. Fashion for me means the different ways of experiencing one’s body, one’s habits, so that everyone can be who they are”.  In 1967 he opened his first store, designed by Amalia Del Ponte, in Galleria Passerella in Milan, and in 1976 the colourful store on 59th Avenue  in New York, which became a meeting point for a host of young people. Here Andy Warhol,  Truman Capote and a very young Madonna,  who held her first concert in 1983 at Studio 54  to celebrate fifteen years of Fiorucci’s activity. The following year Keith Haring used his graffiti art to restyle the Milan store. The exhibition at Ca’ Pesaro will cover all of this with an absolutely original itinerary and design to reflect Elio Fiorucci’s unconventional and unconstricted spirit. In the rooms of the Venetian palace overlooking the Grand Canal, a “large market” will be set up to retrace the designer’s entire history by means of a unique anthology of products, objects, posters, and documentation  of events. The structure not only aims to record his famous shops spread all over the world – from Rodeo Drive, Los Angeles, where he reached the peak of his success in the 1980s, to Tokyo, Sydney, Rio and Hong Kong – but also aspires to reconstruct Fiorucci’s personal philosophy through his inventions, because, as he often repeated, a store, a market is “a relationship between feelings, thoughts, languages and different spirits”. The exhibition catalogue will contain first-person testimonies from people who collaborated with Elio Fiorucci and an extensive dialogue between Gillo Dorfles and Aldo Colonetti.