Eugen Raportoru: The Abduction from the Seraglio / Roma Women: Performative Strategies of Resistance 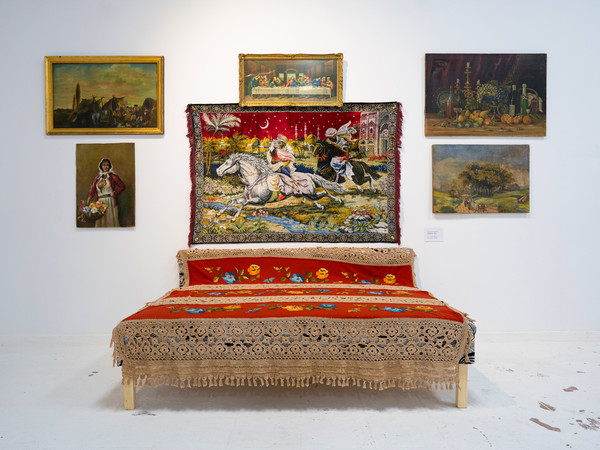 The European Roma Institute for Arts and Culture (ERIAC) is proud to present Eugen Raportoru: The Abduction from the Seraglio, accompanied by Roma Women: Performative Strategies of Resistance, Collateral Event at the 59th International Art Exhibition – La Biennale di Venezia, curated by Ilina Schileru. In the long history of La Biennale Arte, this is the fourth occasion when Roma art is presented, and the second time when ERIAC is commissioner of the collateral event. This solo show of an artist of Roma origin, presented in collaboration with a group of Roma women artists and intellectuals reflecting upon, questioning and offering alternative perspectives on the main theme of “The Abduction”, represents a new milestone in European art history and an achievement of the vibrant European Roma cultural movement.

Among the most recognised painters of his generation in his country of origin, Eugen Raportoru (Bucharest, 1961) has always taken pride in his Roma origins. His recent experiments in installation narrate past memories from his childhood and often contain self-referential elements through which he creates a hidden genealogy of the unspoken truths of domestic environments. The exhibition comprises a series of site-specific installations composed of numerous household objects inherent to the (Roma) domestic space, while a selection of paintings retraces the fraught trajectory of oriental carpets in Eastern European households. The series is grounded in an understanding of the significance of – and bearing witness to – the narratives that such objects embody, as well as their capacity to inform and reflect Roma culture, Roma lives and the distribution of Roma knowledge.

Abduction in this context is charged fundamentally with patriarchal projections onto the female (and the Other) body. Roma Women: Performative Strategies of Resistance, a series of interventions, actions and performances, reflects on the double minority position that Roma women occupy. The audience is invited to enter a resonatory chamber, and to listen and learn from their voices and stories.

The artists invite the viewer to meditate on the specific time-space configuration of notions of identity and history, as well as trauma, hope, the body and affect. Focusing a magnifying glass on the ongoing mystification, exoticism, feminisation, sexualisation and criminalisation of the Roma body in western society, The Abduction invites a critical interrogation of the links between power and realism, violence and the picturesque.

The exhibition will be accompanied by a catalogue.

ERIAC offices in Berlin and Belgrade support a broad network of Roma individuals and organisations working in the fields of arts and culture, giving space to a contemporary art gallery and educational programmes. ERIAC exists to increase the self-esteem of Roma and to decrease negative prejudice of the majority population towards the Roma through arts, culture, history, and language education.

Eugen Raportoru, one of the most important visual artists of his generation in Romania, graduated the Bucharest National University of Arts faculty of painting. Raportoru is the only Romanian artist of Roma origin to show his works at the Royal Academy of Arts in London, Vatican City under the aegis of UNESCO, the Ethnic Museum in Oslo, and in Stockholm through the Roma Party. His work has been exhibited on the walls of the Brâncuşi Hall of the Romanian Parliament, and shown in numerous exhibitions in the Romanian capital, including the Romanian Museum of Contemporary Art (MNAC). A member of the Romanian Union of Plastic Artists since 2010, he received the best painter award at the national UAP Gala in 2021. Raportoru’s work is regularly featured in exhibitions throughout Romania and is found in numerous private collections.

ILINA SCHILERU | CURATOR
Ilina Schileru, Romanian artist, curator and cultural manager, received her MA in Graphic Art from the Bucharest National University of Arts. A member of UAP Romania and founding director of Ebienale, she collaborates with galleries and artist-run spaces in Bucharest. Schileru is programme coordinator of MNTRplusC, a contemporary artist-run space within the National Museum of the Romanian Peasant, showcasing international collaborations between local and international artists and curators, such as Cornelia Lauf, John Cabot University (Rome, Italy); and Piotr Armianovsky (Ukraine). Schileru collaborates with numerous NGOs on integrating immigrant and refugee children through art programmes, and is engaged in establishing joint initiatives with other national museums (Museum of Recent Art, MNAR, etc.).