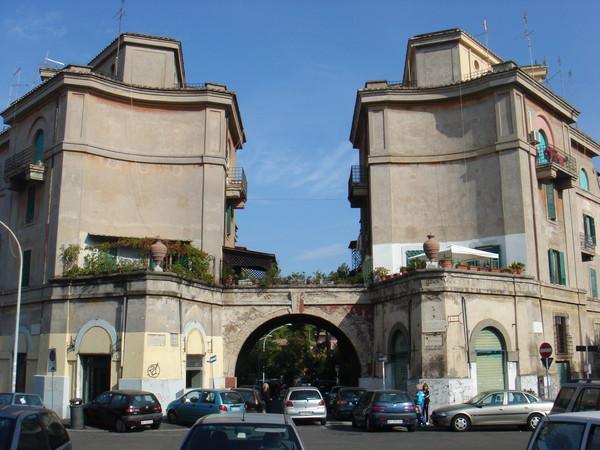 Starting in 1920 the Roman Institute for Popular Housing entrusted the architects Gustavo Giovannoni and Marcello Piacentini with the project of building a new neighborhood on the hills in front of the Basilica di San Paolo Fuori le Mura. The idea was developed following european tendencies, particularly that of the English Garden Cities, urban neighborhoods outside the city center, mostly host to the working classes. Thus, the characteristic lots that make up the nucleus of this neighborhood with its buildings built facing inerior courtyards rich with green.
THINGS TO KNOW: Mahatma Gandhi was brought through the neighborhood (“rione” is the word used often in Rome) during his visit to Rome on 13 December 1931. There are still photos and film footage of his “little walk”.

The cinema has often used the Garbatella as a backdrop with it appearing in, among others, Caro Diario (Nanni Moretti, 1993), Romanzo Criminale (Michele Placido, 2005) and, recently, it was selected as the setting for a popular T.V. series,  I Cesaroni, for which it has become a destination of pilgrimage for its fans.