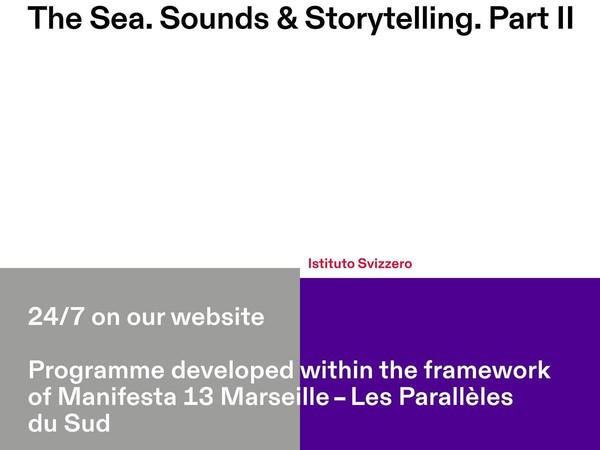 
Once a shimmering blue projection screen for holiday dreams, the Mediterranean Sea is now a symbol of migration movements and the hopes for so many people. On a political level, today it is not only one of the deadliest border regions in the world, but also an accelerant of xenophobic zeal. In view of these shifts, it is of vital importance to seek and include other, polyphonic stories and diverse, also non-European perspectives, and to ask ourselves, with just as much urgency, whether and how these voices are being heard and where the memories related to them are preserved. On this second evening dedicated to ‘storytelling’, we search for these voices and listen to the stories that have crossed the sea.
The artists Binta Diaw, Maria Iorio & Raphaël Cuomo and Dagmawi Yimer present new and prior works which approach the topic from different perspectives. On the one hand, they shed light on the changing violence of exclusionary policies in the Mediterranean over the past 15 years. On the other hand, they also broaden the view on the migration movements between Italy and Switzerland, as well as on the border regimes and the hidden counter-memories that accompany them, or on the polyphony of a young generation of afro-Italians.
The selection of artistic works is accompanied by an essay by Simone Frangi, which will be published on our website in late October.

Binta Diaw (b.1995) is a Senegalese-Italian visual artist based in Milan (IT). She studied Fine Arts at the Academy of Fine Arts of Brera in Milan and obtained an MA at ESAD Grenoble-Valence in France. Her research aims at creating installations of various dimensions and works that comment on social phenomena such as migration and immigration, anthropology, her body in relationship with nature and notions of identity. Defying the Western gaze through a subverted reality, her practice questions perceptions of Italianness and Africanness in relation to her own cultural heritage and upbringing. Embracing visual art with a strongly intersectional, afro-diasporic and feminist methodology based on a physical, personal experience, she is ultimately able to explore the multiple layers of her blackness, herself as a social body and her position as a black woman in a Western context. She was selected for the workshop Q-rated at Quadriennale in Rome, at Museo MADRE in Naples, at the YGBI Residency in Florence, at the Seed for Future memories Residency at Villa Romana. In January 2020 occurred her first solo exhibition, “In search of our ancestors’ Garden” at Galleria Giampaolo Abbondio, Milano. She will be taking part to the 19th Biennale dei Giovani Artisti dell’Europa e del Mediterraneo. Forthcoming exhibitions are: “Nero sangue” at Museo MA*GA in Gallarate and the collective exhibition “Waves between us” at La Fondazione Sandretto Re Rebaudengo. Currently she is resident of VIR Viafarini, Milan.

Simone Frangi is a researcher, writer and curator. He holds a French-Italian PhD in Aesthetics and Art Theory. From 2013 to 2017 he was artistic director of Viafarini – Nonprofit Organization for Contemporary Artistic Research (Milan, IT). He is currently co-director of Live Works – Free School of Performance at Centrale Fies (Trento, IT) and co-directs with Alessandro Castiglioni “A Natural Oasis? A Transnational Research Programme”. He is a professor of Theory of Contemporary Art at the Academy of Fine Arts and Design in Grenoble (FR) where he founded, together with Katia Schneller, the Research Unit “Hospitalité artistique et activisme visuel pour une Europe diasporique et post-occidentale”. In 2016 he was one of the ten curators of the 16th Rome Quadrennial and in 2018 he was guest curator at Museion (Bolzano). Since 2019 he has been a researcher affiliated to the European network morethanthis.eu. From 2020-2021 he will be senior curator of the School of Waters, the 19th edition of the Biennale del Mediterraneo.

Maria Iorio / Raphaël Cuomo are an artist duo based in Geneva and Berlin. Favoring a collaborative approach and long-term development, the duo’s artistic projects trace different past and present mobility regimes and manifest the intertwined histories of these movements. Their recent films focus on the conditions under which narratives can emerge and be translated. They shift attention to the voice and to listening by questioning the hierarchy between semantics and voice, or they emphasize the haunting nature of cinema and its power to reanimate. Their work integrates a curatorial dimension and revisits a larger field of moving image practices and “minor” cinema – amateur, feminist, decolonial. Their work has been presented on the occasion of the 16th Quadrennial (Rome); The Parliament of Bodies (Documenta 14, Athens); Chewing the Scenery (54th Venice Biennale); The Maghreb Connection; and soon Chronicles of that time (Istituto Svizzero, Palermo).

Dagmawi Yimer is a filmmaker and co-founder and vice president of the Archivio delle Memorie Migranti (Migrant Memory Archive). He was born and grew up in Addis Ababa and left his country after the 2005 post-election unrest. After a long journey across the Libyan desert and the Mediterranean, he came ashore on the island of Lampedusa on 30 July 2006. In Rome, after participating in a video workshop in 2007, he co-authored the film Il deserto e il mare (The desert and the sea) along with five other migrants. Subsequently he co-directed the 2008 documentary Come un uomo sulla terra (Like a man on earth). He shot the documentary C.A.R.A. ITALIA (Dear Italy, 2009) and Soltanto il mare (Nothing but the sea, 2011), along with several other short films. He directed the film Asmat-Names (2015), coordinated the collective film project Benvenuti in Italia (Welcome to Italy, 2015), and a documentary titled Va’ pensiero (Walking stories, 2013).

The new audio work by Binta Diaw sounds in my ears as a polyphonic choir accompanied by water noises. It is the voices of young Afro-Italians who—according to the artist—dialogue with the echoing voices of their ancestors. Chorus of Zongwas conceived by Binta Diaw in the context of her installation Chorus of Soil—a plan-like replica of an 18th century slave ship made from earth and seeds. The polyphonic chorus recites verses by the poet M. NourbeSe Philip, which were published in 2008 in her poetry collection “Zong!” and with which she gives voice to the 150 slaves who were thrown into the Atlantic Ocean by the ship’s crew. With Chorus of Zong, Binta Diaw reminds us that the voices of the African diaspora have faded away and unheard for centuries, in Italy and elsewhere. At the same time, the artist also reflects on questions of identity, origin, and belonging which the young Italian Afro-descendant community is currently dealing with.

The forgotten, unheard voices and stories are also a recurring theme in the artistic work of Maria Iorio and Raphaël Cuomo. In the context of “The Sea. Sounds & Storytelling”, they are showing two older works that are more relevant than ever in view of the ongoing debate about the power of inner and outer European border regimes, while at the same time reminding us that human movement as immigration and emigration has always shaped our societies.

The Interpreter evokes the time between a clandestine crossing of the Mediterranean Sea at the end of the 1990’s, and the forced return of some of its young protagonists: Jahouar and Mohez, two former smugglers, a fisherman and his friend, who arranged the voyage towards Italy. The film is based on transcripts of conversations and of a recorded interview with Jahouar and Mohez in their hometown Sayada, a small Tunisian village. The voice of the narrator (performed by actor Riad Hamdi) reconstructs a fragmentary narrative in Tunisian Arabic dialect and suggests the various acts of translation that embodied it. He becomes the interpreter of the words of Jahouar and Mohez, since the recording of their individual account could not be publicly disclosed without exposing them. He recalls the conditions in which furtive meetings took place in several locations, and comments on the process of the film production itself. The Interpreterreports the difficulty of transforming into narrative one’s own history, or moreover the impossibility of openly testifying in a context of criminalisation of undocumented migration and deprivation of freedom of speech in Tunisia under the repressive regime of former president Ben Ali.

Appunti del passaggio reconstructs other forgotten histories and traces of migrants who moved from Italy to Switzerland in the 1960s. Their experiences were characterised by being used as low skilled labour and by being subjected to widespread discrimination and xenophobia. Additionally, through a logic of biopolitical control, the bodies of migrant workers were forced through intrusive health checks at the border. ‘Health risks’ became a strategy to control immigration and the legality of border crossings. The film revisits a number of locations marked by migration: deserted villages in southern Italy, the border zone in the Alps, and the facilities of the former ‘Grenzsanität’ in Brig, Switzerland, a modernist building used as an immigrant health inspection centre until the mid-1990s. By remapping these migrant trajectories, Appunti del passaggio is a counter-narrative to the widespread imaginary of the Western European ‘economic miracle’ of the postwar decades. Yet beyond merely providing a historical framework, it connects, at the same time, this past to the Swiss frontier zone’s current border regime, where arrests and deportations of migrants are a daily occurrence

Dagmawi Yimer gives migrants a voice with his cinematic works—well aware that the documentation of their stories is often neglected and forgotten. Following on from his own biography—the director, who was born in Addis Ababa, arrived in Lampedusa in the summer of 2006 and is involved, among other things, in the ‘Archivio delle memorie migrante’—he focuses on the situation of migrants or racism in Italy. His short and longer film works stand in the aesthetic tradition of Italian political documentary films and focus on the oral and visual memory of migration. In 2010, Dagmawi Yimer returns to Lampedusa to capture the atmosphere on the island for his work Nothing but the sea. Due to its proximity to North Africa, Lampedusa is the first destination for many migrants who flee across the Mediterranean, and the island is accordingly present in international media coverage, but also in the xenophobic propaganda of Italian politicians. In Nothing but the sea, Dagmawi Yimer, who in 2006 only saw the island through the windows of the reception camp, confronts his own migrant history—but also that of others who fled—with the realities of the islanders. It becomes clear that the experience of migration, the departure and the hopes associated with it, as well as the sea, have always shaped the history of the island and its inhabitants. The shooting of Nothing but the sea in 2010 was marked by the agreement negotiated between the former Italian Prime Minister Berlusconi and the Libyan dictator Muammar al-Ghadhafi, which made it impossible for many refugees to cross the Mediterranean Sea. ASMAT – Names in memory of all victims of the sea on the other hand, was realised in 2015 and addresses the experience of the terrible tragedies that took place in the Mediterranean from 2011 onwards, in particular the boat accident of 3 October 2016, in which 366 migrants lost their lives. The film mentions the names of all the people who died in the accident and reminds us that behind these names lie stories, lives and meanings. In waiting, his latest film, Dagmawi Yimer deals with the state of waiting that characterises the lives of so many refugees. It becomes clear that keeping people waiting is always a way to practice domination and power. The film starts from a conversation between the filmmaker and an anthropologist and explores the theme of waiting through the testimonies of three migrant men in Europe. The testimonies about waiting appear in different forms: letter writing, painting and poetic research. With waiting, Dagmawi Yimer’s intent is to integrate academic knowledge into migrant stories and make them accessible to a broader audience by a combination of words and images.