A Timeless Wonder. Painting on Stone in Rome in the Seventeenth Century 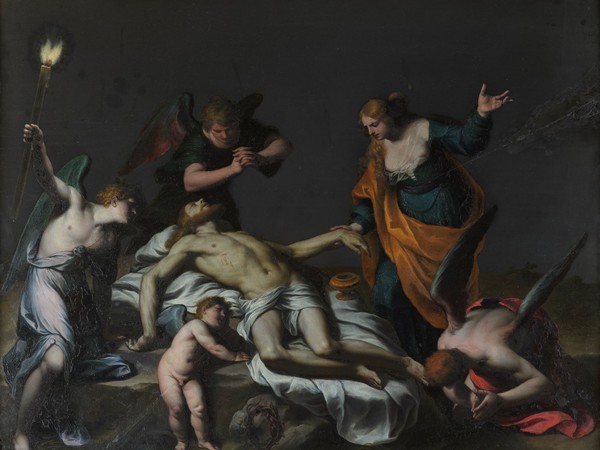 Desperate for the loss of many paintings during the Sack of Rome in 1527, the painter Sebastiano del Piombo began to paint on supports other than canvas, more resistant to dangers and time, and therefore capable of extending the life of the work. To the Venetian painter and this terrible event can be attributed the invention of painting on stone, to which the Galleria Borghese is dedicating the exhibition A Timeless Wonder. Painting on Stone in Rome in the Seventeenth Century, curated by Francesca Cappelletti and Patrizia Cavazzini from 25 October 2022 to 29 January 2023.

The exhibition, designed to draw the public's attention to this production of singular objects, is part of a research project that began in 2021 with an in-depth study of the themes of Nature and Landscape within the Gallery's collection.
It is the collection itself, assembled by Scipione Borghese in the first three decades of the 17th century, that presents examples of stone paintings of considerable interest, while the context, the diversity of materials used in the works and their harmony with historical collections of plants, animals and other natural curiosities that no longer exist, helps to define the sense of wonder and amazement that has characterised it for centuries.

With over 60 works from Italian and international museums and important private collections, A Timeless Wonder. Painting on Stone in Rome in the Seventeenth Century recounts not only the ambition for eternity of works of art, but also the critical debate of an era sensitive to the competition between painting and sculpture, as well as primordial materials, extracted from mines, their adventurous journey to the artists' workshops and their place in collections, which became new venues for these debates, in palaces and villas increasingly rich in furnishings, magnets for the production of luxury goods.

The itinerary, divided into eight sections, begins with THE PAINTED STONE AND ITS INVENTOR, a necessary 16th century premise that demonstrates how the use of metals and marbles as a support for painting, made it not only capable of conquering time, like sculpture, but also to make the memory of a figure long-lasting: this is revealed by works such as the Portrait of Filippo Strozzi (c. 1550) by Francesco Salviati, on African marble; the portrait of Cosimo de Medici (c. 1560) attributed to Bronzino, on red porphyry; or the Portrait of Pope Clement VII with a Beard (c. 1531) by Sebastiano del Piombo.

Starting from the first decades of the 17th century, depending on the geographical contexts, the choice of materials oscillates between the need to guarantee the conservation of the works and the interest in the capacity of these materials to evoke the subject itself, to confront the Antique and the other arts, contributing to the construction of the meaning of the image.

In the section A DEVOTION ETERNAL AS MARBLE, next to talisman-like works, which were occasionally attributed a magical power of protection against physical and spiritual evils, and dedicated to incorruptible images of devotion - often part of the furnishings of the cardinals' bedrooms, such as the Adoration of the Magi (1600 - 1620) on alabaster by Antonio Tempesta or the Madonna and Child with St. Francis (c. 1605) painted on copper by Antonio Carracci - we find paintings on alabaster, slate and marble by Carlo Saraceni, Orazio Gentileschi, Il Caverer Arpino and many others.

Next to these, a small section devoted to VENUS AND HER HEROINES brings together three female images by the Tuscan painter Leonardo Grazia dedicated to Hebe, Lucretia and Cleopatra, created in the first half of the 16th century, two of them on slate; while the ANCIENT AND ALLEGORY section includes works on marble, slate and touchstone, all dedicated to themes from poetry such as Cavalier d'Arpino's Andromeda and Vincenzo Mannozzi's Inferno with mythological episodes. Shiny and gleaming, the backgrounds of the paintings reflect like mirrors the image of the viewer who, while observing it, becomes part of the work.
A NIGHT AS BLACK AS STONE includes the paintings on dark stones (touchstone, slate or Belgian marble) that utilise the blackness of the support to set nocturnal scenes and to bring out the golden finish; while in the sections PAINTING WITH STONE/LANDSCAPE AND ARCHITECTURES and PRESCIOUS AND COLOURED STONES, the surprising backdrops offered by the paesina stone and the preciousness of supports such as lapis lazuli, used for the sea and sky, are enhanced by the artist's intervention: again, the colour and veining of the stones contribute to the composition of the work and to suggest meanings.
The works are often by artists with Florentine training, who experiment with the stone support not only in terms of the eternity of painting, but to highlight the decorative possibilities of the material.
It is in this context that Antonio Tempesta stands out, a singular figure linking Florence and the Nordic world. A painter and engraver of great fortune during the pontificate of Paul V, Tempesta is a master in transforming with just a few skilful touches of the brush, the stone in buildings, landscapes and seascapes.
The discussion on the durability of works of art had become part of the debate on the comparison between sculpture and painting, but in the course of the 17th century the interplay between sister arts intensified: sculptors used coloured marble and painters painted on stone, while metals and precious woods concurred in the creation of extraordinary objects, such as small altars, cabinets and clocks, with complex architectural forms and adorned with small sculptures, reliefs and paintings.

To these objects, in which different types of marble and semi-precious stones are used to generate tension with the very purpose of the object, as in the case of the watch that confronts the elusive flow of Time, and more often because of their value and astonishing craftsmanship, a section of the exhibition is devoted to the presence of coloured stones in Roman aristocratic collections. This spectacular prologue also includes objects that are already part of the Borghese collection, such as the Table made of semiprecious stones from the Roman area in Room XIV or the Tabernacle in the Chapel with an astonishing semiprecious stone frame.

Enriching the itinerary are the statues with polychrome inserts from the Gallery, which generate a necessary comparison with ancient coloured marbles, a subject that was certainly not foreign to the conception of the arts and the display of the collection of the cardinal and his court, and which the exhibition A Timeless Wonder aims to make understood in its unity. A visual unity rich in variations and nuances.