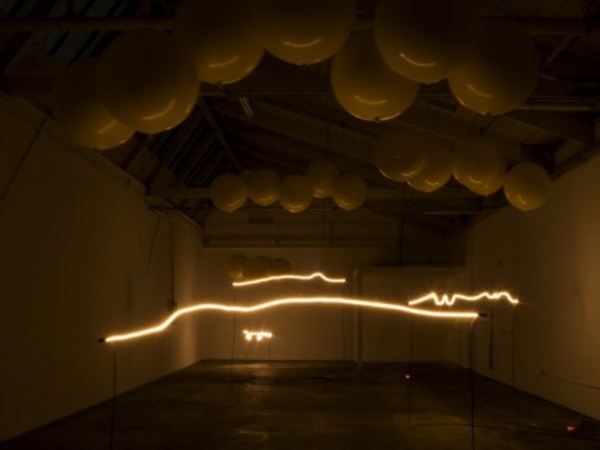 “As the moon orbits the earth it tries to pull everything toward it, the only thing the earth can’t hold on to is water. People can hold on to everything but time. The ocean moves up and down, it cleanses the rocks and sand. Time heals our wounds but it ages our bodies. There’s a beauty and a sadness in the moon, in time. There’s eternal return in the cycle of the tide, it defies time while time defines us. This show merges natural elements and artistic processes to highlight our relationship to time, the intrinsic lightness and darkness of aging, the gravitational pull of life, and the shifting spectrum of melancholy.
The angle of light that illuminates the moon, or location of the moon to the earth, which obscures it, changes month to month depending on the axis of the earth. The moon artworks in the show illustrate an abridged cycle of the moon in October 2014. The phases of the moon were lit up with handmade beeswax candles, each candle a different color, photographed, printed on linen, and then leaned on the wall below the candles, which were re-lit and allowed to burn for their duration, dripping wax onto the print below. The candles were sticking out horizontally from the wall in the shape of the moon, so as they burnt down along their horizontal axis emitting the image of the moon, the wax dropped and landed higher up the vertical axis on the print below, the closer the flame came to the wall, the higher up on the print the wax landed. This vertical movement or wax going up the print describes time, like the tide moving up the beach, while the horizontal placement describes the geography of the moon and the waxing and waning light. The black prints illustrate the various cycles of the moon and the time it takes a candle to burn, while their respective counterparts in white, which were the bottom border of each print, illustrate the phases of the moon, an abstract timeline of a month.
Now is always the golden moment of time, unlike the past and future, which decay or unnerve. In my work I’ve always been concerned with how to translate time honestly and understand it more through art. One way of doing this was employing natural elements like the sun and rain to take the helm of the production. With less mediation on my behalf the viewer interacts immediately with time, such as with a piece of fabric left outside for a year with a tire on it to create an image of the tire by fading the fabric around it. The final image floats between an abstract circle and indexical image of a tire, and the productive process creates a rewarding artwork for myself and the viewer in the present, but it speaks to the past. The optimism of production also holds the melancholy of age.
The tide however moves in a relentless cycle, unlike the forward persistence of time. The same way I’ve always been interested in the duality in art between abstraction and indexicality, nihilism and optimism, I’ve also been interested in life, the personal and the universal. This idea is defined well by the linguistic “shifter”, a word like ‘this’ or ‘that’ which is filled with a different meaning dependent upon its referent every time, or proper pronouns like ‘I’ or ‘you’ which are filled with the person who holds them at the time. The heart of this issue is best said in Rosalind Krauss’ Notes on the Index Part 1with a quote from Roman Jakobson “A shifter is ‘filled’ with signification’ only because it is ‘empty’”. ‘Now’ is a temporal shifter as I see it, it never refers to the same moment since time is fleeting, and the empty, non-existent future is “filled” when it becomes now. This simple idea holds great weight for me and the video illustrates this. Like polaroids of a flower, now blossoms and then dries up.
The helium pieces came about in trying to expand upon the idea of the shifter, not only how it functions temporally, but in the physical world beyond language. The glowing light is charged helium, and the floating balloons are helium filled. Helium here is acting in two very dramatic physical states but remains the same natural element. Most excitingly, the electricity lets us see the color of helium and the balloon gives it form, it is truly representational and quite abstract – I don’t know which one tips the scale and this back and forth gives the work its gravity. The forms of the glass are line tracings of the sides of my family and friends, myself, my dogs. The works show the microcosm of aging; buoyed up in the beginning, full of energy and life, dropping down to a perfect state with time, then eventually resting on the ground, deflated. What has been continues to burn and the balloons serve as a memory of what was.”
- Sam Falls, January 2015
Born in San Diego, USA, Falls currently resides in Los Angeles. He will open a solo exhibition at Franco Noero Gallery in Turin in March 2015. Recent institutional solo exhibitions include Ballroom Marfa, Texas (upcoming, 2015); Pomona College Museum of Art, California; Public Art Fund, New York (2014); LA>