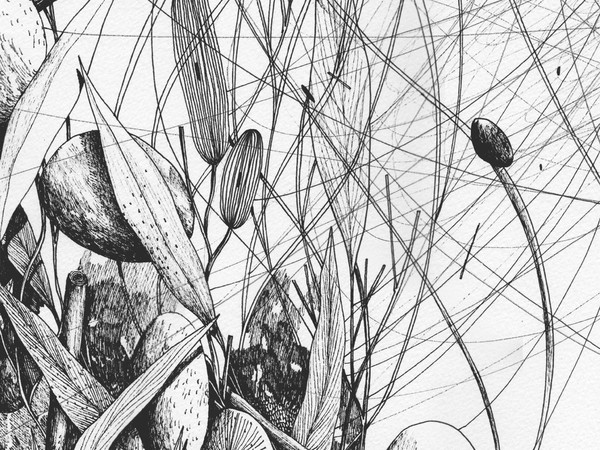 
Tellas (Cagliari, 1985) lives and works in Rome. The artist receives a degree in Visual arts at the Academy of Fine Arts in Bologna where he first came in contact with Urban Art. In 2014 he was listed as one of the 25 most interesting street artists worldwide by the Huffington Post US. His artworks have been exhibited in relevant national and international festivals and art institutions, such as the Venice Art Biennale with his project “Becoming Marni”, Venice (2015), the Bien Urbain Festival, Besançon (2014), Artmossphere, Biennale of Street Art, Moscow (2014), La Tour Paris 13 Project, Paris (2013), Le 4 mur Festival, Niort (2012).
Inspired by his native land, Tellas transforms the harsh landscapes of Sardinia into poetic artworks. He creates abstract organic patterns characterised by a sophisticated aesthetic and a meticulous attention to details. By juxtaposing his work directly into the urban context, Tellas reflects on the ties between humans and Nature and the complex dynamics that blends us into a single system.
For Clima Estremo, Tellas introduces a new series of works linked to those extreme weather events attributed to human-induced global warming. The increasing threat of such unpredictable and unusual severe weather events is considered by many scientists a key factor in the study of climate change. Clima estremo, once considered an issue for a distant future, has moved firmly into our present, becoming a major challenge for contemporary society. Tellas’ solo show is an artistic journey that responds to the need to return to a more intimate connection with Nature. Through convulsive gestures and feverish strokes, Tellas initially wants us to feel as an external factor with respect to Nature. A Nature that can be violent, frightening, not under our control and dysfunctional. However, his artworks subsequently invite us to establish a novel rapprochement to a Nature that is indeed comforting and savior and that embraces and completely pervades the human race towards a balanced harmonious future.
For his show at Wunderkammern Tellas will present new artworks on canvas, textile, paper and engravings, along with an installation and a video-animation. A limited edition silkscreen will be released on occasion of the exhibition. In collaboration with Outdoor festival an indoor site-specific installation entitled Punti di Vista will be on show at the Ex Caserma, via Guido Reni 7, until the 31st of October.