Covers removed from the marble decorations described by Vasari

The Cathedral of Siena unveils the majestic floor 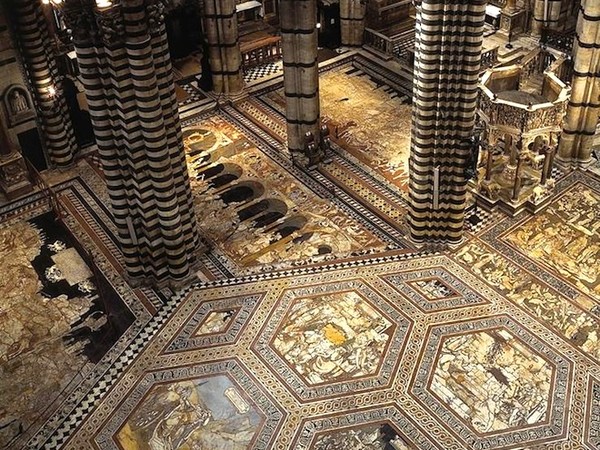 Siena - At the end of the summer, from August 18th until October 27th, 2014, the Cathedral of Siena, unveils its marble floor, usually protected from the trampling of visitors and worshipers.

According to Vasari, this is "... the most beautiful, largest and most magnificent" floor that ever was made.
The work is the result of a complex iconographic program created ??through the centuries, especially between the 14th and 19th centuries. The technique used is that of the graffito and the marble intarsia, with marble from nearby quarries, like the yellow broccatello, the Montagnola gray and the Crevole green.

The preparatory cartoons for fifty inlays were designed by well-known artists, almost all fro Siena, including Sassetta, Domenico di Bartolo, Matteo di Giovanni Domenico Beccafumi, as well as by Pinturicchio from Umbria, who designed the panel with the Mountain of Wisdom in 1505.