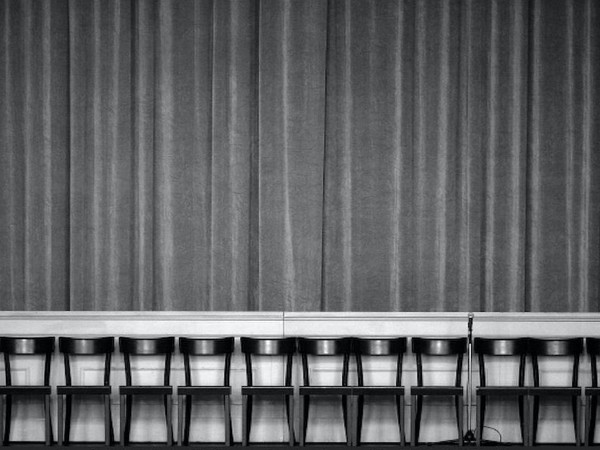 Times: Tuesday - Saturday, 11am – 7pm. Other days and hours by appointment. By reservation only

From the 8th of June to the 2nd of July, 29 ARTS IN PROGRESS gallery in Milan will present the exhibition by Silvia Lelli “KONTAKTHOF–KONTRAPUNKT”. The exhibition will coincide with the release of the artist’s new limited edition book of the same title. Created in 1978, Kontakthof is the only performance Pina Bausch choreographed in three versions: the first with her own historic dance company and the others using non-professional teenage dancers and dancers over 65.

The book consists of photographs that interpret the triptych created by Pina Bausch, one of the most original and important choreographers in the world. During her long career as a photographer in the fields of avant-garde theatre, performing arts, dance and music, Silvia Lelli photographed every version of Kontakthof between the years 1981 and 2010. Kontakthof signifies place of contact: it is a story of human relationships, of the suffering and joy that animate bodies in movement. “I want to highlight how in this present moment the word ‘contact’ resonates with meaning.” – Silvia Lelli In a continuous dialogue between dance and theatre, Lelli’s photographs represent a precious testimony and offer various reflections on the evolution of a unique journey which, through the medium of dance photography, document movements and gestures. “I entered into the repetition of steps, of gestures and expressions” – recounts Silvia Lelli – “to try and recreate close-up, almost within touching distance of the dancers, an end result that would fully depict the dynamism and energy of the moment. There’s nothing more exciting than a choreography that’s relentlessly changing and pushing forwards creativity.” To visit the exhibition you must book in advance by writing to us at staff@29artsinprogress.com: entrance will only be permitted on receipt of booking confirmation.

Meeting the Artist & Book Signings
It will be possible to meet the artist in the gallery on the 8th, 10th and 12th of June by booking through the email address staff@29artsinprogress.com where you can also preorder a copy of the artist’s book, available in a limited edition of only 150 signed and editioned copies 10 of which also include an original photographic print. The project was made possible thanks to the success of the recent fundraising campaign promoted by the online platform contribute.to and by the generous support of its founder and collector Nicola Erni.

Silvia Lelli
Multi-faceted artist and innovator, Lelli explores the performing arts and has documented musical performances, theatre, dance and the performances of some of the greatest artists of our times, becoming one of the world’s most respected photographers in the field of avant-garde theatre and dance. After graduating with a degree in architecture from Florence, she was drawn into the world of photography, dedicating herself particularly to avant-garde theatre, classical music, to dance and melodrama. Official photographer of La Scala theatre of Milan since 1979, her published and exhibited works are among the following: Storia di un soldato (1979), Ritratti senza posa (1985), Neon collection / Neon installation (1982-2017), Flying Music (2008), Danza Dentro-Danza Oltre (1998-2004), Körper und Raum (1999- 2001), In cammino, al bordo (2007), Attraverso (2021). In 2011 she participated in the 54th Venice Biennale exhibiting in the Italian Pavilion and in 2013 she participated in the exhibition and publication of Parlando con voi, incontri con fotografe italiane. In 2017 she produced a video installation entitled Vuoto con memoria. She collaborated with Salzburg and Ravenna Festivals and documented Riccardo Muti’s career since 1978 and the history of La Scala Philharmonic Orchestra since 1981. In 2019 she exhibited alongside Roberto Masotti at Palazzo Reale with two exhibitions Musiche and Bianco Nero Piano Forte as well as the exhibition Il corpo della voce at Palazzo delle Esposizioni in Rome.