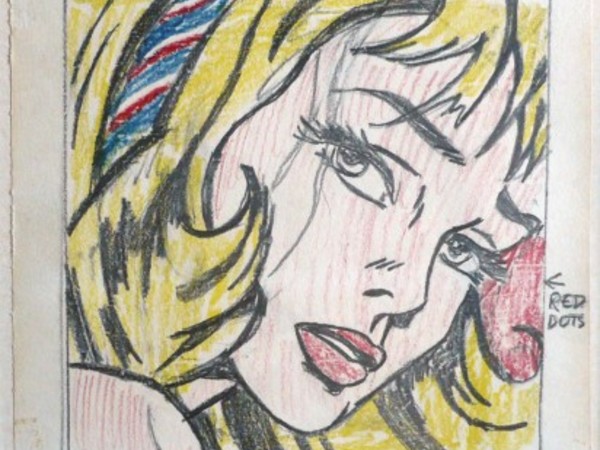 GAM Turin presents an important exhibition devoted to the works on paper and large paintings by Roy Lichtenste in, the undisputed master of Pop Art, born in New York (1923-1997).
This exhibition has been produced by Fondazione Torino Musei together with Skira publisher.
235 works are being shown Italy for the first time, thanks to the close cooperation with the Estate and the Roy Lichtenstein Foundation, alongside important loans from prestigious international museums like the National Gallery in Washington DC, the Museum of Modern Art and Whitney Museum in New York, the Art Institute in Chicago and from European and Italian public and private collections.
Together with the drawings, covering a time span which goes from the early Forties to 1997, GAM exhibition also features some breathtaking large paintings and a photographic documentation, as a testimony to the artist at work.
GAM offers the public an unmissable opportunitybecause one rarely has the chance to admire such a rich body of works by the American master. In the past, indeed, Roy Lichtenstein’s drawings have been exhibited on very few occasions: at Paris CNAC in 1975 the exhibition Roy Lichtenstein: Dessins sans bande, later also shown in Berlin and Aachen in Germany. In 1987 MoMA organised the exhibition The drawings of Roy Lichtenstein. Finally, a group of works on paper was displayed in 2005 at the Museo de Arte Abstracto Español in the exhibition Lichtenstein: En proceso/In process, later shown also in other museums in Spain, France and the United States.
Turin exhibition, curated by Danilo Eccher, GAM director, showcases the most intimate and private side of Roy Lichtenstein’s oeuvre. Indeed, this exhibition focuses on his
First ideas, that is his early ideas, a source of inspiration for works which would have later become great masterpieces known worldwide.
The curatorial project analyses both the language of the stylistic changes in the creative process of the works on paper, and the unbelievable literary world feeding Lichtenstein’s image, his narrative model made of surprising combinations of stories and images.
The catalogue, published by Skira, features important critical essays by Danilo Eccher, Andrea C. Theil (Manager of the Catalogue raisonné Roy Lichtenstein Foundation), Bernice Rose (former curator at the Department of Drawings del Museum of Modern Art, New York and currently Director of The Menil Collection’s New Drawing Center and Study Center), Thomas Zacharias (former professor at the Academy of Fine Arts in Munich, critic, art historian and expert on Roy Lichtenstein’s works on paper). Dorothy Lichtenstein (President) and Jack Cowart (Executive Director) from the Roy Lichtenstein Foundation contribute with valuable testimonies on this great artist’s work. Alongside the catalogue,the bookshop will offer the public a wide supply of merchandising.