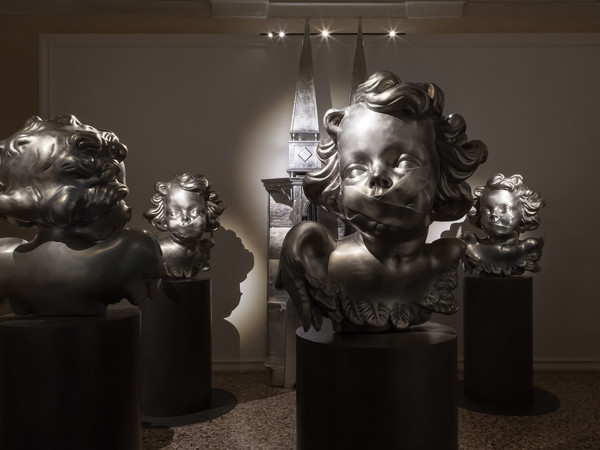 Ticket price: free and open to the public

Centro Studi e Documentazione della Cultura Armena (CSDCA), Venice, presents Angels Listening, an immersive and intimate installation by artist Rachel Lee Hovnanian. Curated by Annalisa Bugliani, the exhibition is a Collateral Event within the context of the Biennale Arte 2022 and is being presented at the Biblioteca Zenobiana del Temanza and in its gardens in Dorsoduro, an historic 18th-century Venetian building that has served as the headquarters of CSDCA since 1991. Angels Listening will be on view from 23 April – 27 November 2022.

Angels Listening is conceived as a meditative space to reflect on pressing issues related to identity, knowledge, time, as well as interpersonal experience and relationships. Featuring seven large-scale angels cast in white bronze, who have been ‘silenced’ as Hovnanian purposefully created the cherubic figures of this installation with two “pieces of tape” sculpted in bronze and covering their mouths, representing the suppression of truth and offering a reflection on the role of art in this unprecedented historical and social conjuncture. The angels have been artfully staged around a silver confessional box entitled La Scatola Catartica (The Cathartic Box), and the artist invites viewers to write on a ribbon their innermost thoughts, whether repressed due to fear of judgement or sheer inability to speak them. In a performative act of emotional relief through catharsis, the visitor will then place the ribbons into the box while ringing an awakening bell that symbolizes the role of the angels as mute listeners. At the end of each day, the messages will be taken out of the box and compiled as a collective stream-of-consciousness on prayer-like mats dispersed throughout the exhibition space’s garden, stimulating the audience’s personal interpretation.
The angel is a universal figure, present in Zoroastrian religious texts and those of the major monotheistic faiths, including Christianity, Judaism, and Islam. A genderfluid figure with both anthropomorphic and divine features, angels are at the service of the spiritual progress of the human being. Angels Listening evokes seven angels, as there are seven days in the week, seven frequency bands and colors that create the visible spectrum and seven fundamental units of measurement. Seven bright stars that form the Big Dipper and Ursa Minor constellations, seven heavenly virtues and musical notes and seven deadly sins. Seven is the number of hills that comprise Rome – the core of Western culture – and seven is the Buddhist number of completeness.

Rachel Lee Hovnanian comments, “The way we perceive the world and connect with each other today has been deeply altered by the recent social distancing imposed by the global pandemic as well as the polarized nature of today’s political and cultural systems, which cemented the dominance of technology and alienation over faith and communal experiences. Angels Listening offers a space that transforms hundreds of silenced voices into a chorus of confessions, demonstrating the liberation associated with catharsis and the sanctity of meditative environments in moments of shared isolation.”   Hovnanian’s multidisciplinary practice spans from photography, video, sculpture, painting, and installation, delving into the social codes surrounding femininity and gender relations, as well as broader value systems and the means by which we formulate our public selves. Questioning the role of art in today’s society, Hovnanian’s work navigates the post-internet world, investigating contemporary notions of narcissism, obsession and intimacy, and alienating addiction to modern technological devices and media. Her installations establish surreal and immersive environments that challenge viewers to examine their own cultural values. After living and working in Italy for part of each year of the past decade, Hovnanian comes to Venice with her most intimate exhibition to date, releasing the transformative power of our inner selves.
Rachel Lee Hovnanian is a New York-and Miami-based artist whose multidisciplinary practice explores the complexities of modern feminism, cultural ideals regarding physical perfection, and the psychological effects of new media and technology. Born in Parkersburg, West Virginia, and raised in Houston, Texas, she received her BFA from the University of Texas, Austin, and completed postgraduate studies at the Parsons School of Design in New York. Recently, Hovnanian has been the subject of several solo exhibitions in Italy, where she has lived and worked for several months every year for the past decade. These include a one-woman museum show at the Palazzo Mediceo di Seravezza (2019), a large-scale installation at the Church of San Cristoforo in Lucca (2020), as well as an exhibition in Pisa at the Church of Santa Maria della Spina in 2021. With The Women’s Trilogy Project, a three-part solo presentation at Leila Heller Gallery (her representation since 2006) in 2018, Hovnanian became one of the only female artists to be given three consecutive exhibitions at a New York gallery. She has exhibited internationally in solo exhibitions in the United States, Asia, Europe, and the Middle East, at venues including Leila Heller Gallery, New York and Dubai; Pechersky Gallery, Moscow; Joyce Gallery, Beijing; and Fundación Pons, Barcelona. Her work has been included in group exhibitions at the United States Embassy in Budapest, Hungary; Parasol Unit Foundation, London; Des Moines Art Center, Des Moines; Imago Galleries, Palm Springs; Manarat Al Saadiyat, Abu Dhabi; Loretta Howard Gallery, New York (curated by Beth Rudin DeWoody); and at the Nassau County Museum of Art, Roslyn Harbor; among other venues. Hovnanian’s work resides in numerous private and public collections, including the Multimedia Art Museum, the Moscow Collection, the collections of the Royal Family of Dubai, the Mallin Collection, the collection of Lily Safra, the collection of Darren Walker, the corporate collections of AT&T, Dior, Graff Diamonds, TD Bank, and the 21c Museum Hotels Collection.