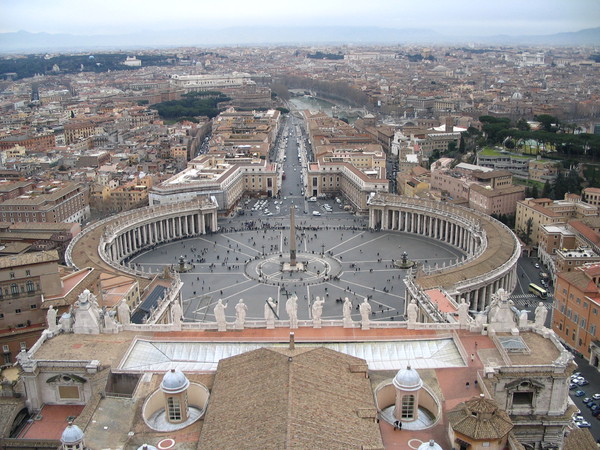 The most important piazza of the Christian world. A vast part of its architectural allure is thanks to the work of Bernini (1656-57) who created the eliptical space 240 meters wide surrounded by the splendid colonnade of 4 rows with 284 columns and 88 pilasters. At the center is the Vatican obelisk from Alexandria, Egypt, which Caligula placed in the so-called Circus of Nero (37 a.C.).  The two side fountains are by Carlo Maderno (1613) and Carlo Fontana (1677).
The original idea of surprise wanted by Bernini, based on which pilgrims would see the piazza as they entered from a series of tiny streets, was literally destroyed by Benito Mussolini when he eliminated the tiny residential area (Spina di Borgo) surrounding the piazza and built Via della Conciliazione.

THINGS TO KNOW: The moving of the obelisk from the side of the Basilica to the center of the piazza took from April to September of 1586, a colossal work undertaken by Domenico Fontana for Pope Sixtus V. The bronze globe at its summit was taken off during the move, now in the Capitoline Museums, which, during the Middle Ages, was thought to contain the ashes of Julius Caesar.
Tweet