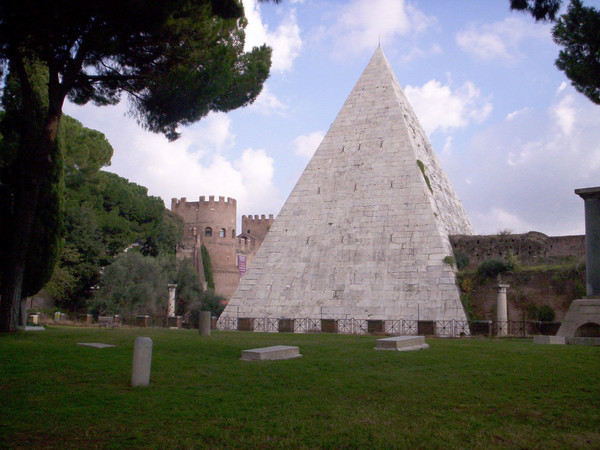 The funeral monument of Caius Cestius Epulonis, built with Carrara marble, a testimony to the influence of egyptian cultural after the roman conquest of 30 B.C. It has a base of 30 meters and is 36 meters high. Inside is a sepulchral chamber with frescoes of Nike in the pompeian style, not open to visits. The pyramid was incorporated into the Servian Wall (since 1943, Via Persichetti has been there) and next to the Porta San Paolo (Saint Paul's Gate), which marks the starts of Via Ostiense and gets its name from the Basilica of  San Paolo Fuori le Mura.
THINGS TO KNOW: The inscription recalls that the pyramid was built in 330 days by the heirs of the deceased, who stipulated this timely creation in his will at the threat of his heirs losing their inheritance.