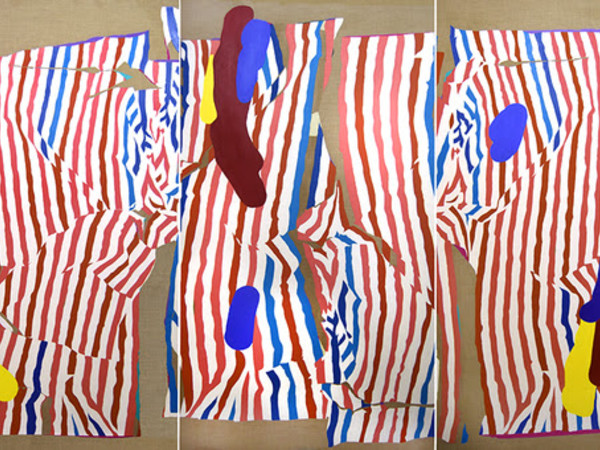 This show will include forty acrylics on paper, fifteen ceramic sculptures, and about ten medium and large acrylics on linen.

Nuria Mora’s visual language is strictly connected to her ability to observe the surrounding space, whether it is an urban or natural landscape, capturing and isolating details that she synthesizes in abstract-concrete chromatic modules and expanding in constantly evolving motives. It is a geometric deconstruction of reality where the artist has developed a formal and chromatic code that can be interpreted as her own personal signature.

In the last twenty years, the Madrilenian artist has drawn inspiration from the outside world, taking inputs coming from the normal flow of everyday life inside galleries and institutions. The pandemic has completely reversed this perspective, revolutionizing for everyone the concept of “normality” itself and forcing each one of us to enclose our whole lives inside our homes, with those individuals who are the closest to us.
This radical change brought Nuria close to a new dimension: an artistic space where her interior self, her roots and her most profound identity could be unleashed towards the exterior.
The totem sculptures, the drawings and the acrylics on linen express the ties between family and self, memory and present, heritage and legacy, tradition and contemporary sensibility.
The title of the show “J.L. vs Lilla” is an homage to her parents, where J.L. stands for “José Luis”, Nuria Mora’s father, while Lilla is her mother’s name.
The exhibition is about a personal and intimate universe, about the unstable balance of family life, and about building a new home to heal the marks left by painful moments.