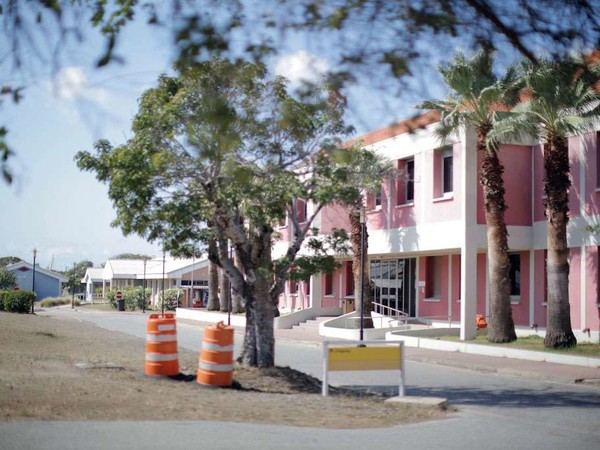 Magazzino is pleased to present When the Whistle Glares, the new solo exhibition by Domenico Mangano & Marieke van Rooy, curated by Lorenzo Benedetti. The exhibition, which follows by six years Mangano's solo show (2013) and almost two years from the personal Homestead of Dilution at the Nomas Foundation in Rome (2017), is the first in the gallery since Mangano & van Rooy started working as duo, in 2014.
The exhibition includes a film and a series of sculptures made during an artist's residence at a psychiatric clinic on the island of Curaçao, a former Dutch colony in the Caribbean. This is the final chapter of The Dilution Project, a long-term artistic research developed around the concept of antipsychiatry and focused in particular on the legacy of Nieuw Dennendal, a radical experiment for the treatment of mental illness developed during the 1970s in the Netherlands. The focal point of Nieuw Dennendal's experiment was the utopian concept of 'dilution': the idea of approaching healthy and mentally ill people, in an attempt to overcome the growing sense of polarization and hierarchization manifested in the society of the time. It is important to frame this experience in the context of the anti-psychiatry movement, developed in the same years in Europe, and of the innovations proposed in the psychiatric field by Franco Basaglia in Italy.
The Dilution Project consists of a long-term research of the apparently existing separations between center and periphery, normal and healthy, mental illness and infirmity. Mangano & van Rooy questioned the concept of 'dilution' and the meaning that it might have as part of an artistic process, and of life in general, developing this research project during two artist residences in the Netherlands (Kunsthuis SYB, Het Vijfde Seizoen), and one in Curaçao (Instituto Buena Bista). In each of these, they worked together with mentally ill patients, creating a body of works ranging from film to photography, drawings and sculptures.
When the Whistle Glares is also the title of the film, which closes the trilogy and is presented for the first time to the public. It is a participatory documentary realized in the Capriles psychiatric clinic in Willemstad. The protagonists of the film are the artists, the patients of the clinic, and the students of the Instituto Buena Bista art school which is located on the grounds of the clinic and where the artists spent four months in residence. The work has developed into a kind of engaging performance that, from appearing as a simple portrait of the clinic, gradually transforms in a 'rite of dilution'. Colors, sensations and sounds are typical of the Caribbean, but the main focus of the artists is to present the anomalous yet disturbing point of view of the protagonists. As in the two previous films, When the Whistle Glares suggests the kind of conflict between the concept of normality and aberration, such as the evolution from the repressive forms of the psychiatric institutions to an alternative and inclusive form of psychiatric therapy.
Also on display there is a series of new ceramic sculptures, Coral Draft, Mental Reef, originated from the Curaçao experience and produced at the Sundaymorning@EKWC (European Ceramic Work Center) in the Netherlands. The sculptures postulate an utopian model of mental architectures contaminated with organic forms, and incorporated by flutes which can also be activated and played by the spectators. The choice of terracotta and sandy glazes, together with the sound originated, is not accidental. The wind is an omnipresent element in the film, as well as the collective modeling and the firing of the whistles made in an archaic kiln created by the artists during the residence. The whole essence of the operation is the development of the concept of dilution that, even more in this final project, expands aesthetically by bringing together people, natural elements and imagination, and transforming the whole process of inclusion into a kind of magic rule to be discovered and revealed.
When the Whistle Glares was made possible thanks to the support of the Mondriaan Fund. The artists would like to thank Instituto Buena Bista and EKWC.