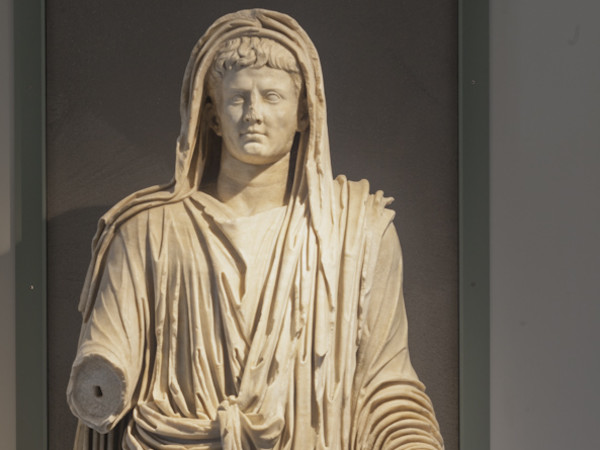 In the section of the National Archaeological Museum dedicated to public space, the places of the political, economic, religious and institutional life of Aquileia are presented.

The marble statues depicting some members of the Julio-Claudian family, which reigned in the 1st century AD, must undoubtedly belong to a prestigious building.

The statue of Augustus, larger than life, portrays the heir of Caesar in the guise of pontiff maximum, the supreme priestly office, wrapped in a large toga that covers his head, as a sign of respect for the gods.

The sculpture was found in 1879 together with the image of the emperor Claudius who instead wears the military cloak (paludamentum). At the same point, in 1894, another statue would have re-emerged, the only one of a female figure, which can be identified, thanks to an inscription, with Antonia Minor, mother of Claudius.

The group, perhaps originally located in the forum complex, would have been part of a cycle of images intended to enhance the imperial house. It is likely that the places or buildings in Aquileia where this group showed everyone the weight of central authority have changed over the centuries.