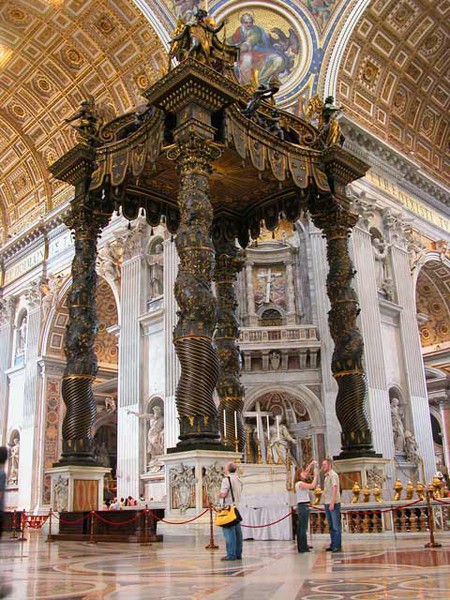 The baldachin is placed in correspondence with the underground tomb of Saint Peter and subsequently covers the main altar of the basilica. The great sculptor and architect created it with the help of various artists including Borromini on a commission from Urban VIII Barberini, in the form of a processional catafalque (a type of suspended canopy) suspended by twisted columns.
At the back of the apse is the splendid Cattedra (the Chair of Saint Peter) held up by the fathers of the Church, an incredible baroque piece which contains the relic of the actual wooden cattedra thought to be that of Saint Peter.
Curiosity:  The bronze used for the baldachin was taken from statues from the pediment and the structure covering the portico of the Pantheon. From this fact comes the saying “ciò che non fecero i Barbari, fecero i Barberini” - “what the Barbarians didn't do, the Barberinis did”.
Tweet