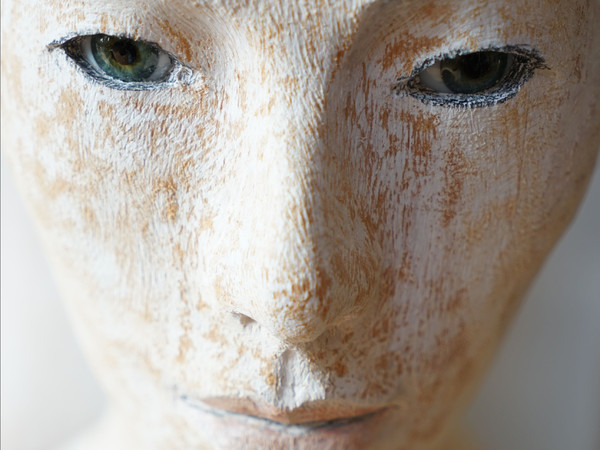 
Walter Moroder (*1963, Italy) works in the techniques of drawing and large-format woodcuts, but his main work is sculptural. For this, he uses mainly wood, plaster, and - after a specific selection - casts in bronze.

The core subject is the work on the human figure; mainly female figures and female bodies. They are standing in a waiting position with slender proportions and no recognizable relationship to the real space - except for the floor - and usually without a pedestal or platform. While their open presence makes them an object of sensual contemplation, conversely, the viewers seem to be absent and irrelevant to them. The human-sized vertical figures stand upright in an exposed position, their eyes looking into the void, or - when closed - they look inside themselves, and they are seen by us who look at them.
In the creation of the suggestive details such as clothing, hands, feet, mouth or neck, ciphered gestures from archaic pictorial sources with Greek, Egyptian or Asian influences dominate, combined with elements from an unusual world. Culturally practiced contrasts between visible and invisible, male and female, veiling and nudity, body and mind, feeling, and psyche are relativized. The female figures made by a (male) human hand, with their embodiment of human experience, push through seeing and being seen for increased empathy and participation in visual perception. In their vertical form and as a counterpart to the viewer, they make practices of gender encounter vivid and stimulate reflection on the infinite in the body of one's own finiteness. (Markus Klammer)