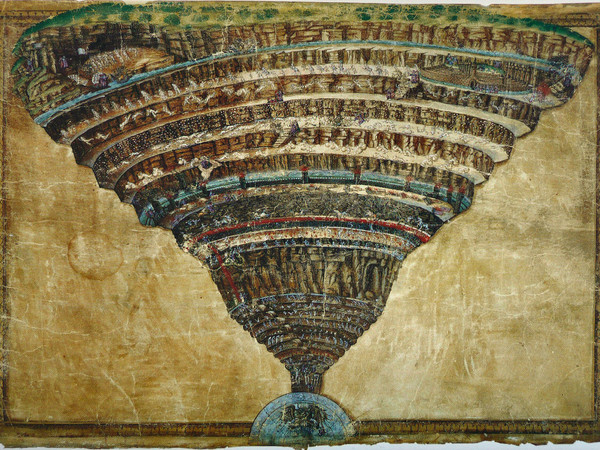 To celebrate the seventh centenary of the death of Dante Alighieri, the Scuderie del Quirinale, Rome, presents “Inferno”, a new major exhibition of international importance - from 15 October 2021 to 9 January 2022 -  devised by Jean Clair and curated by Jean Clair and Laura Bossi in homage to the Great Poet in the year of his celebrations.

The exhibition, inaugurated 13 October by the President of the Republic, Sergio Mattarella, investigates the infernal universe, its landscapes and its inhabitants. It recounts its iconographic fortune over the centuries so as to offer a new interpretation to the visual imagination of the Florentine poet who in his Comedy created a realistic mental and symbolic map of that universe.

It is an ambitious project that, focusing on the first of the three canticles of the Divine Comedy, the one which is always most represented, aims to highlight the definitive allegorical meaning of Dante’s great theological fresco, namely: to show humanity a path of liberation from the miseries and horrors of «the little threshing floor that so incites our savagery» (Par. XXII, 151) towards a condition of happiness and salvation.

The first major art exhibition dedicated to this theme, “Inferno” through more than two hundred works of art, on loan from over eighty major museums, public collections and prestigious private collections from Italy and the Vatican, as well as from France, the United Kingdom, Germany, Spain, Portugal, Belgium, Switzerland, Luxembourg, and Bulgariarecounts the persistence of the iconography of the world of the damned from the Middle Ages to the present day.

The turning point of the entire exhibition is Dante’s vision of the otherworldly world which is aimed at questioning the historical evolution of the concept of evil and its condemnation in the afterlife.

The exhibition deals with different themes and subjects, according to a transversal chronology: the origins of hell as the kingdom of Lucifer, the Final Judgment that condemns the damned to eternally dwell there after death, the landscape of the infernal cone, the multiform nature of the Devil and the temptations with which he tries to attract us, as well as the earthly transliteration of hell into the devastations of war, the anguish of imprisonment, alienating and deleterious work, the darkness of madness, the nightmare of extermination.

After breaching the climax of Evil, the exhibition concludes with an evocation of the idea of salvation that entrusted by Dante to the last verse of the canticle: “and thence we came forth to see again the stars”.
A section entirely dedicated to redemption, not just that of Christianity but of every form of Humanism, to raise our gaze upwards - the universe, the infinite, the absolute, God. A gesture of poetic liberation and salvation that indicates the way to regain a new humanity far from the claustrophobic nightmares of hell.

A unique opportunity to admire works of unqualified historical and artistic value, starting with The Abyss of Hell by Sandro Botticelli, a marvellous painting on parchment executed by the Master to illustrate the Divine Comedy witch today, due to it fragility, is in fragments. The work with the depiction of Dante’s Inferno is on special loan by the Vatican Apostolic Library for the first two weeks of the exhibition.
It is unquestionably the most famous and emblematic masterpiece of this type of iconography.

Among the most spectacular works, the plaster version of the monumental and famous Gate of Hell by Auguste Rodin (1:1 scale fusion model), made in 1989 through the fusion of one of the last bronze specimens of the work. On loan from the Musée Rodin in Paris, with great deal of organizational and logistical effort, the colossal 7-metre-tall artefact is located at the beginning of the exhibition, representing the pinnacle of artistic reflections on the poem of Dante.

Among the other masterpieces is The Last Judgment by Fra Angelico, The Temptations of Saint Anthony Abbot by Jan Brueghel, Lucifer by Franz Von Stuck, Sternenfall by Anselm Kiefer.
Once again, the famous Demon of Valladolid in polychrome wood, the majestic canvas of four metres by Gustave Doré “Virgilio and Dante in the Ninth Circle of Hell” to the Neapolitan theatre "Inferno" with puppets from Catania and Palermo, from the Antonio Pasqualino International Puppet Museum in Palermo.

There are a major number of institutional collaborations, including those with the Uffizi Galleries, the Musée d'Orsay, the Royal Academy of London, the Bibliothèque Nationale de France, the Museo Nacional de Escultura in Valladolid and the Museu Nacional de Arte Antiga in Lisbon.

After the great success of the exhibition on Raphael, the Scuderie del Quirinale returns, therefore, to contribute to celebrate another important anniversary in world culture with a powerful event. One that is ambitious and spectacular and able to lead the visitor into unchartered territories through the power of imagery and the depth of ideas.

"On the occasion of the eighteenth anniversary of Dante’s death, the Scuderie del Quirinale participates in the national celebrations with a large exhibition project.
“Inferno” is a powerful exhibition, focused on what is perhaps the most famous, well-known and represented of the three canticles. The exhibition captures and presents, with the force of iconography, the total moral impulse of the Comedy, which through an apocalyptic vision strives prodigiously towards individual and collective redemption, of final salvation, to overcome a world that lives badly. Not surprisingly, the last room is titled 'Riveder le stelle’, presents an impressive sequence of masterpieces of art and photographs from space probes, in a moving representation of a starry sky.
A great intellectual effort, under the guidance of a great historian of art and thought such as Jean Clair.
But also a great productive effort, for which a special thanks must go to its partners, American Express and Unilever, who have decided to support organically and structurally the Scuderie del Quirinale".

"The ethical warning that Virgil imparts to Dante at the end of the journey, after his encounter with Lucifer and at the moment of entering into the narrow way out of hell (‘conviensi dipartir da tanto male’ – ‘perforce depart from so much evil') reflects the founding assumption of the Comedy, explicated by the same Alighieri in the famous Epistola a Cangrande della Scala: ‘Removere viventes in hac vita de statu miserie et perducere ad statum felicitatis', that is ‘Tear the souls of the living from the condition of incompleteness and accompany them to the state of grace'.  Moral impulse and at the same time ardent message of renewal, invective and exhortation, action of individual and social redemption, moral and political, this assumption finds its allegorical iconography in reviewing the stars and its synthesis in a single universal goal: the rediscovery the form of human happiness".

"To celebrate the seventh centenary of the death of Dante Alighieri in a worthy fashion with an art exhibition the theme of Hell has come to the fore. Not only because is it, compared to the other canticles, undoubtedly the most amazing work of infernal iconography that has inspired artists, the one that has the most enduring impact on European visual culture, but also because of its relevance, in a world where the destruction of nature, the social and cultural crisis prompts us to reflect on the destiny of humanity and on the last moments.That it might be expressed in the dark warnings of eternal suffering in medieval miniatures, in the encounter with a satanic universe made of earthly tragedies in Renaissance and Baroque art, in the torments of the soul depicted in the romantic and symbolist paintings, or in modern psychiatric interpretations of the mystery of Evil, the belief in damnation has proved extraordinarily persistent, exercising in turn, terror, piety, morbid fascination or 'scientific' curiosity".

As usual, on the occasion of the exhibition "Inferno", the Scuderie del Quirinale offers visitors a program of side meetings entitled "Infernauti". These are a series of events, organized in collaboration with prestigious international institutes, aimed at exploring some specific aspects of the exhibition that, over the centuries, have helped to define the scope of Dante’s work as to be still current and crucial for contemporary culture.
Following a path traced by Jean Clair himself and thanks to the participation of scholars, specialists and leading figures of the world of culture, these meetings will focus on some key themes: from the vision of Dante and his contemporaries on the world of hell to the historical evolution of the concept of evil.