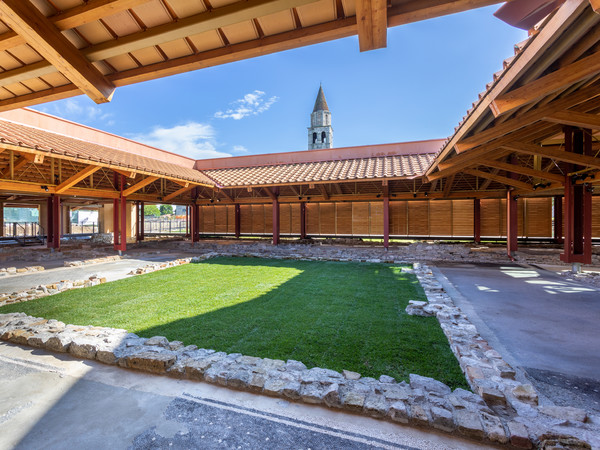 With an area of 1,700 square meters, the Domus di Tito Macro is one of the largest residences from the Roman era in Northern Italy. The house extends for about 77 meters in length and 25 in width at the widest point, between two cobbled streets of the city, within one of the southern blocks of Roman Aquileia.

It is believed that it was the home of Tito Macro, a wealthy citizen of Aquileia, on the basis of the discovery of a stone weight with an iron handle bearing the inscription T. MACR.

The entrance to the house was from the west through an atrium supported by four columns and equipped with a central basin for collecting water with a well partially preserved and integrated in the missing part.

In line with the entrance was the tablinum, the host's reception room, with a rich mosaic floor. The rear part of the house revolved around a central open space, the garden, surrounded by a mosaic corridor and decorated with a fountain.

The large reception room opened on it and, to the south, the triclinium, flanked by living rooms and a bedroom (cubicle). In the opposite wing there was the kitchen with a masonry counter. In the eastern part four shops have been recognized, including a baker's shop with a bakery oven, the remains of which have remained in sight.

The excavations and the architectural project
The house was partially studied in the 1950s. More recently, between 2009 and 2015, it was the subject of excavations conducted by the Department of Cultural Heritage of the University of Padua, in agreement with the Aquileia Foundation and with the concession of the Italian Ministry of Culture (MIBAC).

The work carried out by the University of Padua brought to light an entire house, an 'atrium' house, attested for the first time in Aquileia. Hence the decision of the Aquileia Foundation to tackle one of the greatest and most original challenges: to re-propose a Roman house in its entirety and space, creating a roof that would make the articulation of the spaces evident to the public and offer different sensory, but no less exciting, than that which can be experienced through virtual reconstructions.

Cossar Fund
The Domus of Tito Macro is located within the Cossar Fund, the land that connects Piazza Capitolo to the cycle path and to the southern access of the River Port.

The Cossar Fund embraces a large portion of one of the southern blocks of Roman Aquileia, at the south-east corner of the republican walls, from which the famous mosaic of the rape of Europe, the beautiful floor with a vine branch with a bow and the 'unswept floor', now on display at the National Archaeological Museum of Aquileia, in addition to the mosaic of the Good Shepherd with a singular dress, temporarily placed in Palazzo Meizlik.

Together with the Domus di Tito Macro, identified entirely between the two roads that delimit the district, the remains of at least two other houses have been identified.