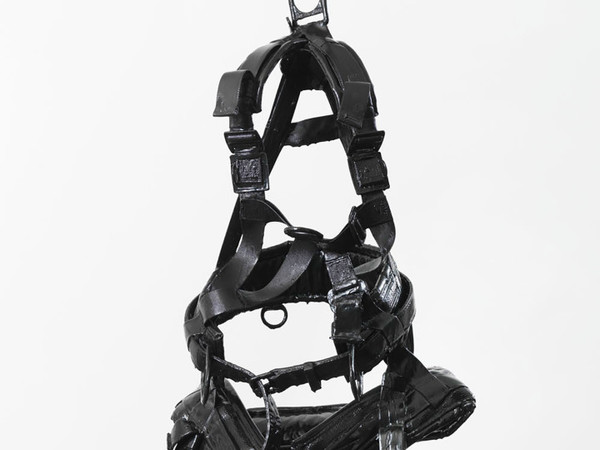 
Galleria Raffaella Cortese is pleased to present Monica Bonvicini's first exhibition at the gallery. The show is spread across all three exhibition spaces and displays works conceived and produced specifically for the occasion.

Monica Bonvicini is known for her large sculptural installations, and is also an artist with a complex and complete artistic activity, which includes different media, from drawings to video installations and photography. She studied art in Berlin and at Cal Arts, Valencia, CA. Since 2003 Bonvicini holds a position as Professor for Performative Arts and Sculpture at the Academy of Fine Arts in Vienna. She lives and works in Berlin. Her research has always been formed around the concept of architecture and its history as a language able to unify political, economical and social issues. From the 90s she confronted architecture from a gender theory point of view, with the wittiness that always characterizes her works.

For the show Our House she is literally taking apart the private walls of dwellings in a series of large black and white drawings based on the destruction caused by climate change, from wildfires to hurricanes. The works refer to the concept of Capitalocene formalized in the theories of Donna Haraway, feminist exponent researching the relationship between science and gender identity. The images are taken from online magazines where it is stated that many of the natural disasters are caused by an abusive ecological behaviour perpetrated by the man. Together with the drawings, the main gallery space features the sculptures Diener and and the video Slamshut. Produced in 2017, the Diener sculptures are covered readymades that turn into something reminiscent of clothes stands. Peculiarly leaning on the wall, these body-sized sculptures are actually braces for concrete walls. Specifically produced in and around Milan, these sculptures embrace the handcrafts tradition rooted in one of the most fashionable and experimental design cities of Europe. A tool for construction is transformed into an eccentric yet domestified object of design.

In Via Stradella is presented a new series of wall works, four prints on frame that take inspiration from the book Testo junkie. Sexe, drogue et biopolitique by Beatriz Preciado. The works, unusually colourful for Bonvicini’s standards, consist of prints of a multitude of cuts-out of body parts taken from scrap magazines and tabloids. In the resulting composition every sexual reference vanishes and a vivid analysis emerges underlining how pleasure and body parts are considered commodification objects. Each one of the four works shows a pink-sprayed portion of the sentence “I like to stand with one leg on each side of the wall” taken from the text The German Issue by Heiner Müller.

Bonvicini has recently returned to exploring the sociology of walls that, in this show, embraces both private and institutional structures. The artist has been working with walls since her days as a student at Cal Arts, and has produced pieces such as the large architectural intervention I Muri (1991), verbrauchte nostalgie (1993), and Wallfuckin’ (1996), just to name a few. In one of the three exhibition spaces, a large-sized exhibition wall is held up from one side by a chain. Structural Psychodrama # 3 (2017) features a minimal intervention into the space through the use of building material. The dramatization and the role-playing reflect the institutional codex of behaviour associated with the walls of a gallery, both as a place to display art and one to see and understand it.