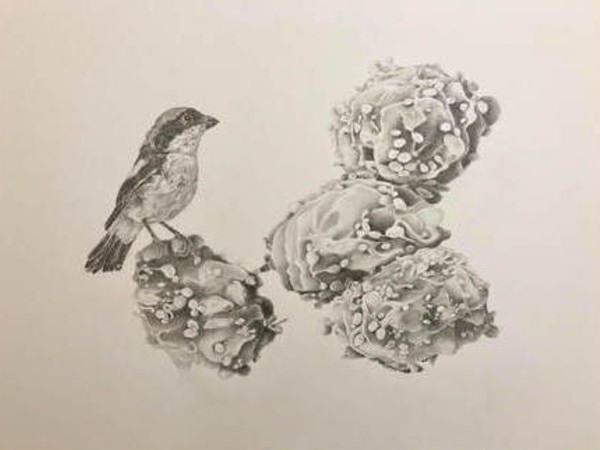 The new series of drawings are visual “collages,” which use different images to transform their original meanings to create something entirely unexpected.

The work investigates parallel elements between art and science, such as the relationship between geometric forms and patterns found in both science and abstract art. The drawings of taxidermy birds are both real and artificial at the same time and the current work now has both birds and scientific images enlarged and functioning as nests/environments.

The influences for the current series of bird images include my elementary school field trips to the Museum of Natural History in NYC, Audubon bird prints my parents had in our family house, and visits to national history museums in Italy and France. In addition, I have also been looking at scientific illustrations from the past, such as those by Robert Hooke. The works are in black and white to reinforce the sense of the past and to give the impression of being actual drawings from science books.

My artistic influences include early 20th Century collage artists, such as the Dadaists (Max Ernst and Duchamp), as well as, the work of Joseph Cornell.

Thomas Hammer’s acrylic and oil paintings on canvas are built in layers. The first few accrue with gestural flourish and become more deliberate as the composition emerges. Each layer interacts with the one before it, obscuring some of the canvas beneath it while adding texture, color, and complexity to the painting. The end result is an artifact of the process but it is also a constructed reality, akin to a carefully composed photograph that flattens three dimensional space to a single plane.

Hammer’s works on paper are created with physical gestures similar to those in his paintings. They distill the process to a few simple actions, each executed spontaneously. The aim in creating these works is to imbue a narrative quality with the greatest economy possible.